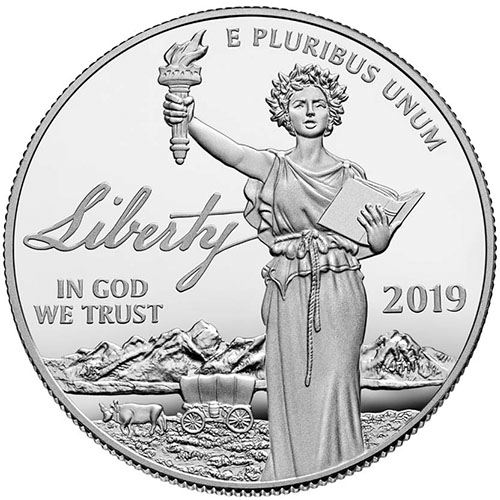 All 2019-W 1 oz Proof Platinum American Eagle Coins are available from the United States Mint with a capsule protecting the coin and a US Mint commemorative box to house the product. Each one comes with its own Certificate of Authenticity.

On the obverse of 2019 Proof Platinum American Eagle Coins includes a new design of Lady Liberty standing with her torch held high in the foreground as she watches over the rivers, mountains, and prairies of the United States of America. This is the second design of three in the Preamble to the Declaration of Independence representing “Life, Liberty, and Pursuit of Happiness.”

The reverse of 2019-W 1 oz Proof Platinum American Eagle features a new design that is common on the three designs in the 2018-2020 series of Proof Platinum Eagles. It depicts an American bald eagle with its wings spread to soften its landing as it clutches an olive branch in its talons.

Please don’t hesitate to reach out to Silver.com if you have any questions about platinum coins. You can call us at 888-989-7223, chat with us live online, or simply send us an email with your inquiries.