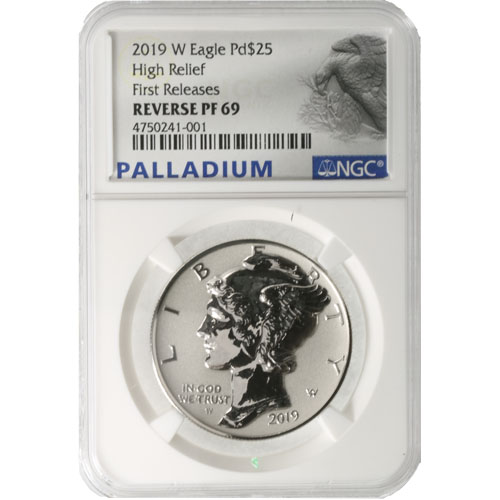 Palladium American Eagle coins debuted from the United States Mint in 2017. The series has made a name for itself quickly with the release of a new version in each of the first three years. The coins debuted in bullion, were issued in proof in 2018, and then as a reverse proof specimen in 2019. Now, 2019-W 1 oz Palladium American Eagle Reverse Proof Coins in near-perfect condition are available to you for purchase online at Silver.com.

For the first year of issue, the US Mint struck and released a BU version of the Palladium American Eagle with a mintage cap of 15,000 coins. It sold out in its entirety from the US Mint. For the second year of availability, the US Mint struck the coin as a proof specimen with the same 15,000-coin mintage and achieved the same result, a complete sellout. The third year saw these impressive reverse proof Palladium Eagles issued with a mintage cap much higher at 30,000 coins.

The obverse side of the 2019-W 1 oz Palladium American Eagle Reverse Proof Coin includes the Winged Liberty design. Created in 1916 by Adolph A. Weinman, this design features Liberty in left-profile relief with a winged Phrygian cap. Liberty’s appearance was so close to that of the Roman messenger god Mercury that the coin became known as the Mercury Dime.

On the reverse face of 2019-W Palladium American Eagle Reverse Proof coin is an image of the American bald eagle. The bald eagle depicted here is featured on a cliff’s edge with a small sapling in its talons.

These 2019-W 1 oz Palladium American Eagle Reverse Proof Coins are near-perfect specimens. The PF69 certification indicates the coins showcase full, original mint luster and come with no more than two minor detracting flaws. Those flaws are located only outside of the primary focal points of the coin. Each one is a reverse proof with mirrored designs and frosted elements.