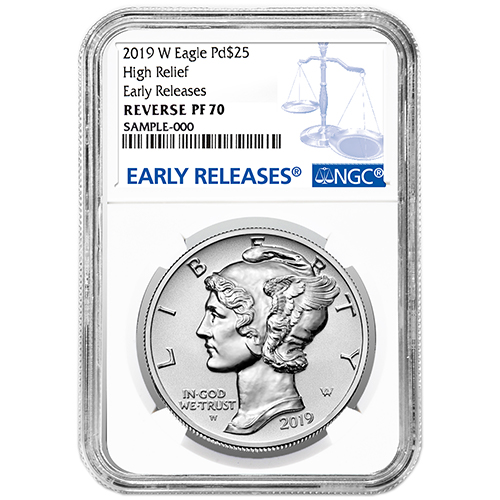 Known officially as Winged Liberty, this design was colloquially referred to by Americans as the Mercury Liberty design. It featured on the US dime from 1916 to 1945 and captured Liberty in left-profile relief with a winged cap reminiscent of the Roman messenger god, Mercury.

On the obverse of 2019-W 1 oz Palladium American Eagle Coins is that image of Liberty. She is featured in left-profile relief wearing the Phrygian cap with “Liberty” inscribed above her head. Other markings on this face of the coin include “In God We Trust,” Weinman’s “AW” initials, and the “W” mint mark of the West Point Mint.

The reverse side of 2019 Palladium American Eagles bears yet another design from Adolph A. Weinman. This design first appeared on the 1907 American Institute of Architects gold medal and bears an American bald eagle on the edge of a cliff. The bird raises its wings behind its figure and clutches onto a small sapling growing from the edge of the cliff.

These 2019-W 1 oz Palladium American Eagle Coins are perfect specimens. Coins with a PF70 certification have full, original mint luster and no detracting flaws. The included Early Release designation indicates the coins were received for grading within the first 30 days of their 2019 release date from the US Mint.

We encourage Silver.com customers to call us with questions at 888-989-7223. Additionally, we can be reached online using our live chat and email address features.