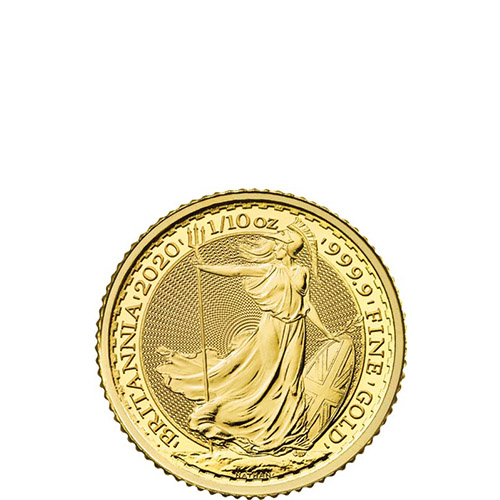 The Gold Britannias from the Royal Mint of England represent one of the most popular items of gold for sale among modern investors. The official gold bullion coin of Britain, as of 2013 this series boasts six weights with each coin offering 24-karat gold to investors. The series debuted in 1987 behind only the Gold Krugerrand, Gold Maple Leaf, Gold Panda, and Gold Eagle coins. Right now, 2020 1/10 oz Gold British Britannias are available to purchase online at Silver.com.

Each of the individual 2020 1/10 oz Gold British Britannias in this product listing comes to you with a protective plastic flip or mint tubes for multiples of 25 coins. The coins are all in Brilliant Uncirculated condition from the Royal Mint of England.

Over the course of time, numerous changes have occurred in this program. In addition to the added weights just mentioned, the series shifted from 22-karat gold (1987-2012) to 24-karat gold (2013-onward) and has altered the background fields to enhance the visual brilliance and security of the coins. The background field on the reverse now features radiating sun lines behind the figure of Britannia, while the obverse has a guilloche background field behind the bust of Queen Elizabeth II.

Queen Elizabeth II features on the obverse of these 2020 Gold British Britannias in the fifth-generation portrait from Jody Clark. Mr. Clark created this portrait of the Queen in 2015 and became the youngest artist to ever do so for the Royal Mint, being just 33 years old at the time. The Queen is shown in right-profile relief wearing the George IV State Diadem Crown.

Britannia displays her power and courage in the design on the reverse of the 2020 1/10 oz Gold British Britannias. Designed by Philip Nathan in 1987 for the debut of this series, Britannia resolutely defends the British Isles with a trident in one hand to grant her control over the seas and a shield in the other to ward off any invaders.

If you have any questions, Silver.com customer service is available to help. You can reach us on the phone at 888-989-7223, chat with us live online, or email us directly.