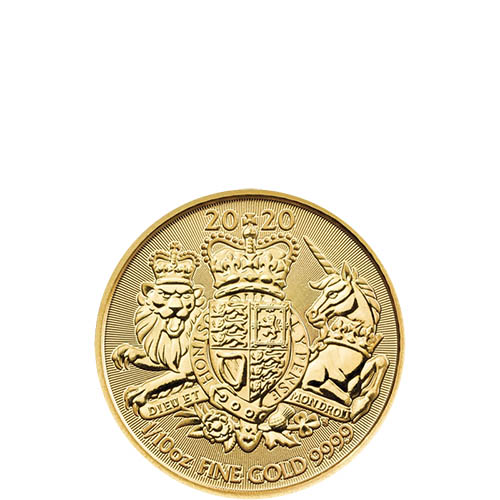 The gold for sale in the British Royal Arms series of bullion coins grows to include a second weight and first fractional-ounce coin in 2020. After the series debuted in 2019 with 1 oz gold and silver, it now expands to this 1/10 oz gold coin and a 1 oz platinum coin with the same reverse design from Timothy Noad. Today, the 2020 1/10 oz Gold British Royal Arms Coin is available to you online at Silver.com.

All of the 2020 1/10 oz Gold British Royal Arms Coins in this product listing come to you with either individual protective flips or mint tubes of 10 coins. Each individual coin is offered in Brilliant Uncirculated condition.

Queen Elizabeth II features on the obverse of each 2020 1/10 oz Gold British Royal Arms coin with a background element that includes the guilloche visual. The Queen is shown in right-profile relief in a design created in 2015 by Jody Clark for the Royal Mint of England. Used since 2016, the design shows Her Majesty at the age of 89 and is the fifth portrait of her reign.

The modern Royal Arms of England is depicted on the reverse of the 2020 Gold British Royal Arms coin. In this design, a powerful Lion of England looks out at the viewer from the left of the shield, while the Unicorn of Scotland turns its head away on the right side of the shield. The central shield is quartered and has the Three Lions of England in the upper-left and lower-right quadrants. The Lion of Scotland is depicted in the upper-right quadrant and the Harp of Ireland in the lower-left quadrant.