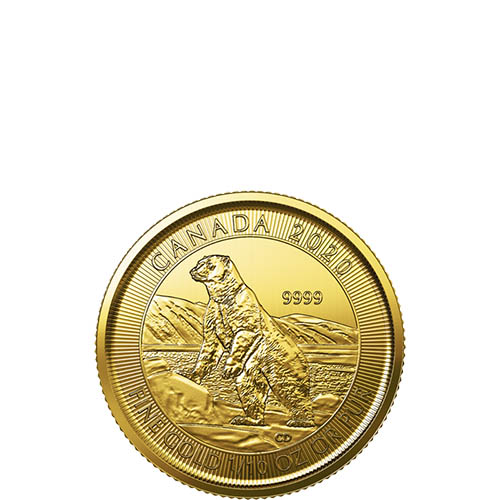 If you buy gold coins from the Royal Canadian Mint, there are more options available than the bullion from the Maple Leaf Series. Among the newer coins available on annual basis are the Gold Canadian Polar Bears. Available in 1/10 oz gold as an affordable investment option, the Gold Polar Bear is different than the Maple Leaf Series in that it offers a new reverse design element each year. Now, 2020 1/10 oz Gold Canadian Polar Bears are available to you for purchase online at Silver.com.

Polar bears are genetically related to brown bears, but it is believed that a divergence in the species occurred some 400,000 years ago. The divergence was identified using DNA technology to compare changes in the genetic makeup of the brown bear species and the polar bears. DNA studies have found that most brown bears still have roughly 2 percent genetic material from polar bears.

Queen Elizabeth II is found on the obverse field of 2020 1/10 oz Gold Canadian Polar Bears. The design here features Queen Elizabeth II in right-profile relief. This design comes from Susanna Blunt and was created in 2003 for the Royal Canadian Mint as the fourth-generation effigy of Her Majesty to feature on Canadian coinage.

A large polar bear is shown in the reverse design of 2020 Gold Canadian Polar Bears. This image is the latest in this series and depicts a large polar bear surveying its ice shelf surroundings. The polar bear is depicted standing up on its hind legs and using one of its front paws to balance its frame as it looks around at the open, icy waters of the Arctic and the snow-covered peaks in its surroundings.

These 2020 1/10 oz Gold Canadian Polar Bears come with protective plastic flips for individual coins, and all items are available in Brilliant Uncirculated condition.