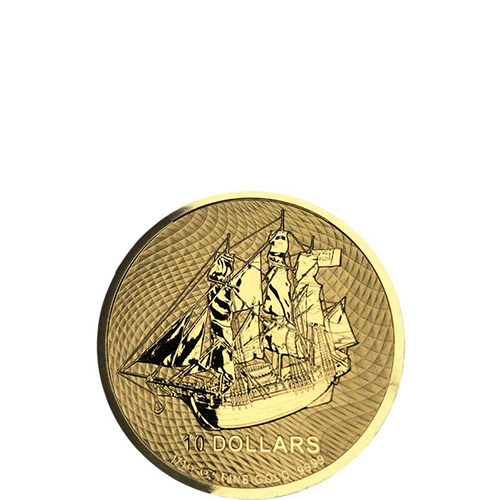 The gold coins for sale in the Cook Islands Bounty Series offer a design of the infamous HMS Bounty on coinage from one of the many beautiful destinations in the South Pacific. The islands rely on tourism for the bulk of economic activity, but the nation also has a robust offshore banking sector and offers a wide range of bullion coins. Right now, 2020 1/10 oz Gold Cook Islands Bounty Coins are available to purchase online at Silver.com.

Each 2020 1/10 oz Gold Cook Islands Bounty Coin available here comes with an individual plastic capsule from the mint. The coins are offered in Brilliant Uncirculated condition and represent one of three options in the series. Investors can also choose between a 1 oz silver coin and 1 oz gold coin when buying gold coins from this collection.

The HMS Bounty was originally built to serve as a cargo ship in private merchant service. Not much is known about its voyages as the Bethia in the three years before the Royal Navy purchased the vessel. The Royal Navy bought the ship with a singular purpose in mind: a scientific mission. The ship was to sail from Spithead in England to the islands of Tahiti in the South Pacific.

The obverse design of 2020 1/10 oz Gold Cook Islands Bounty Coins includes a bust of Queen Elizabeth II. Her Majesty is featured here in the fourth-generation design from the Royal Mint of England that has been adapted for use on coins throughout the Commonwealth nations. The effigy was designed in 1998 by Ian Rank-Broadley and shows the Queen wearing the Girls of Great Britain and Ireland Tiara.

On the reverse field of 2020 Gold Cook Islands Bounty Coins, you will find an image of the HMS Bounty. The Bounty was relatively small for service in the Royal Navy, particularly in terms of being a cargo ship. The collier vessel was refitted by the Royal Navy after it was purchased, with upgrades include the installation of four 4-pound cannons and 10 swivel guns in the event the ship needed to defend itself on its mission.

The HMS Bounty conducted just one voyage as a part of the Royal Navy. After a 10-month mission to Tahiti and five additional months on the main island of Tahiti, a mutiny occurred as the vessel was sailing back toward England. The mutiny occurred near the modern-day nation of Tonga.

If you have any questions, please feel free to ask. Silver.com customer service is available at 888-989-7223, online through our live chat, and via our email address.