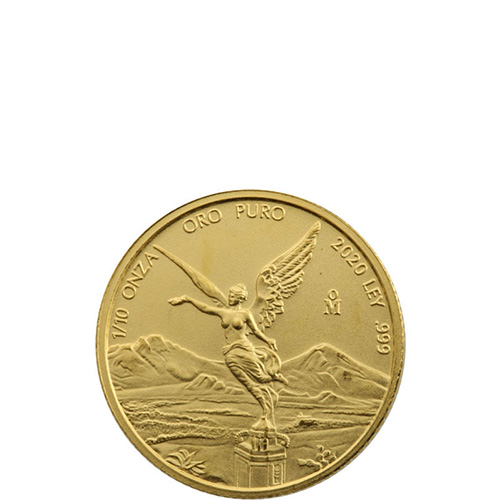 Gold Libertad coins were introduced for the first time by the Mexican Mint in 1981 and based on the Gold Centenario coin produced in 1921. The latter coin was a circulation 50 Peso gold coin with an image of the Angel of Independence, known also as Winged Victory. Her figure was revived in the 1980s for use on the Mexican Libertad bullion coins. Today, 2020 1/10 oz Gold Mexican Libertads are available to you online at Silver.com.

Gold Mexican Libertad coins have an interesting production history when compared to the steady nature of the release of the Silver Mexican Libertad. The first Gold Libertads were issued in 1981 with weights available in 1 oz, 1/2 oz, and 1/4 oz gold. However, the coins were issued for just one year and then halted for a decade. The coins returned in 1991 with the 1/10 oz and 1/20 oz weights added, were struck for four years, halted again until 2000, skipped in 2001, and resumed in 2002.

All of the 2020 1/10 oz Gold Mexican Libertads available to you in this product listing will ship inside of an individual protective plastic flip. The coins in this particular listing are available from the Mexican Mint in Brilliant Uncirculated condition.

Winged Victory is the feature design element on the obverse of all 2020 Gold Mexican Libertads. This image of Victory was modified in the early 2000s by the Mexican Mint to depart from the original Centenario design with Victory that offered a more focused, front-facing image of Victory. In this design, she is shown as you see her atop the Mexican Independence Victory Column.

The national coat of arms for Mexico is visible on the reverse face of the 2020 1/10 oz Gold Mexican Libertads. This design is used on the fractional-ounce coins, while the 1 oz coin has this emblem plus 10 historic versions of the same design. On this side of the coin, the coat of arms is featured in the center with the Mexican golden eagle battling a serpent. Inscriptions include “Estados Unidos Mexicanos” above the national emblem.

Please feel free to contact Silver.com if you have any questions about these gold coins for sale. You can reach us on the phone at 888-989-7223, chat with us live online, or email us directly.