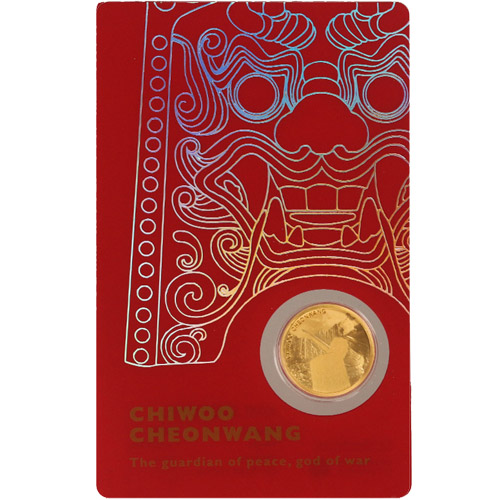 The South Korean Chiwoo Cheonwangs have been available since 2016 with new images on the reverse depicting the famed God of War and Guardian of Peace. Through the first four designs in this series, we saw Chiwoo in his role as the God of War leading his forces into battle and relishing in his victory. The 2020 design captures Chiwoo as the Guardian of Peace, though war will inevitably be involved in keeping the peace. Now, 2020 1/10 oz Gold South Korean Chiwoo Cheonwangs are available to you for purchase online at Silver.com.

The first four designs in the Gold Chiwoo Cheonwang Series followed Chiwoo from start to finish through an unknown battle. The first design showed Chiwoo just after getting his armor on, while the second release depicted Chiwoo mounting his horse and rallying his forces. The third design showed him riding through the battlefield in the thick of the fight. The fourth release showed him basking in the glow of victory.

For the fifth design, the initial battle is over, but Chiwoo must now prepare for a new fight in his role as the Guardian of Peace. The Hell Gate has emerged from beneath his empire near the Salt Lake. Alerted to its arrival by the guardian Rattus, Chiwoo must rally his forces again and seek out the 12 Guardians to assist in combating evil.

On the obverse of 2020 1/10 oz Gold South Korean Chiwoo Cheonwangs is a depiction of Do ggae bi on the shield of Chiwoo Cheonwang. This year’s obverse design has been modified for the first time in the history of the series and the modified visual appearance of Do ggae bi is based on a work of art owned by the Gyeongju National Museum of the Republic of Korea.

The reverse side of the 2020 1/10 oz Gold South Korean Chiwoo Cheonwangs comes with a new image of Chiwoo Cheonwang once again. For this new release, Chiwoo is depicted back in his full body armor in front of the Hell Gate where he is poised to clash with whatever evil forces emerge.

Your 2020 1/10 oz Gold South Korean Chiwoo Cheonwangs come with an individual red assay card. This card includes a capsule for the gold medal and an assay card that authenticates the weight, metal content, and purity of the product, and also showcases a unique serial number.

Silver.com customer service is available to answer your questions when buy gold by calling us at 888-989-7223. You can also chat with us live online or email us directly.