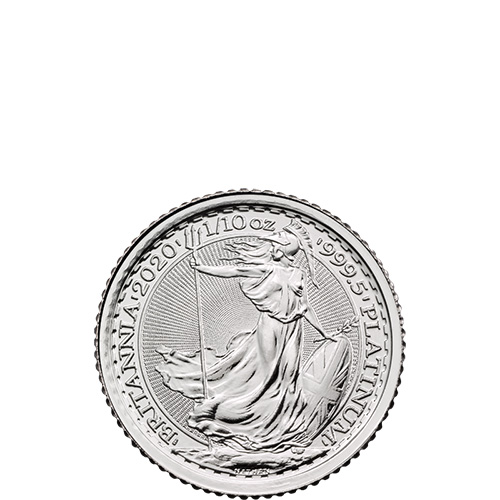 The Royal Mint of England’s primary bullion series is known as the Britannia. The coins include a gold bullion, silver bullion, and platinum bullion version for investors. Each coin has the image of Britannia as created by Philip Nathan in 1987 for the gold bullion version of the coin. Right now, 2020 1/10 oz Platinum British Britannia Coins are available to purchase online at Silver.com.

Each 2020 1/10 oz Platinum British Britannia coin is available to you for purchase in Brilliant Uncirculated condition. The coins are housed individually in protective plastic flips, in tubes of 25 coins, or Monster Boxes of 500 coins.

The 1/10 oz Platinum Britannia is one of two options for platinum coins in the Britannia Series. All Britannia Series coins have Philip Nathan’s 1987 depiction of Britannia. This modern impression is a powerful rendition of the female personification of Britain and was created to showcase the naval and seafaring prowess of the British people.

On the reverse of each 2020 1/10 oz Platinum British Britannia Coins is a depiction of Britannia. This design includes Britannia wielding a trident in her right hand that allows her to control the seas. Her left hand rests on a shield that she defends the nation with and it is emblazoned with the Union Jack, the official flag of Great Britain that incorporates elements of all members of the United Kingdom: England, Scotland, Wales, and Northern Ireland.

Britannia first appeared on coinage in the British Isles during the Roman Era. Emperor Hadrian issued provincial coinage with the image of Britannia as early as 119 AD, while the British first used her effigy during the reign of King Charles II beginning in 1687. Her figure continued to feature on the coins through the union of the crowns of England and Scotland in 1707.

The obverse of 2020 Platinum British Britannia Coins feature the portrait of Queen Elizabeth II. This depiction of Her Majesty was created in July 2015 by Jody Clark and is the fifth-generation image of the Queen to feature on British coinage.

If you have any questions, you should feel free to contact Silver.com. Our customer service associates are available to you at 888-989-7223, online using our live chat, and through our email address.