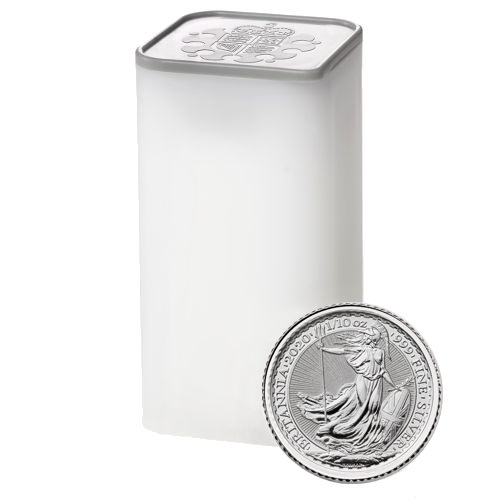 The British Britannia bullion coins were introduced by the Royal Mint starting in 1987 with the gold coins. From 1987 to 1996, only gold bullion options were available in the series. Starting in 1997, the Royal Mint offered the Britannias with an option to buy silver with a 1 oz coin as the primary choice. Now, 2020 1/10 oz Silver British Britannia Tubes with 16 coins are available to you for purchase online at Silver.com.

Britannia first appeared on British coinage in the 1st century AD when the British Isles was a province of the Roman Empire. However, Britannia eventually disappeared from British coinage. She would return on a permanent basis in 1672 during the reign of King Charles II. Since that time, Britannia has appeared on coinage from the kingdom during the reign of all subsequent monarchs.

Queen Elizabeth II is visible on the obverse of 2020 1/10 oz Silver British Britannia Coins. Her Majesty is shown here in right-profile relief with the George IV State Diadem Crown on her head. This design is the fifth-generation release of the Queen’s portrait for use on currency and it was developed in July 2015 by Jody Clark.

Britannia is shown in the reverse design of the 2020 Silver British Britannias. Designed in 1987 by Philip Nathan, this powerful image shows Britannia standing with a Corinthian helmet on her head, a trident in her right hand granting her control over the seas, and a shield in her left hand with the Union Jack on it allowing her to defend the British Isles.

These 2020 1/10 oz Silver British Britannia Tubes are available to you with a total of 16 individual coins inside. All of the coins are 2020 Silver Britannias and each one is available in Brilliant Uncirculated condition. The coins come packaged in the original Royal Mint tube.

Silver.com customer service is available to assist you at 888-989-7223. We are also available to you on the web using our live chat and email address features.