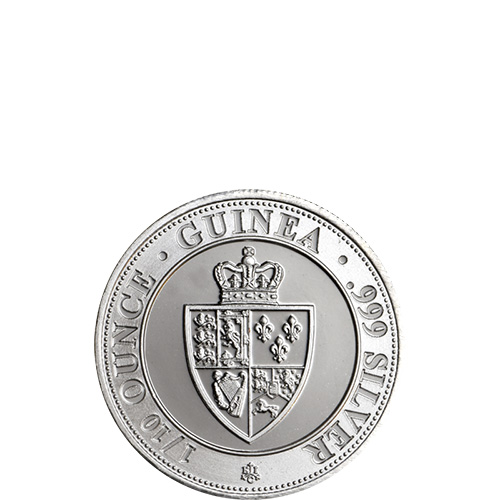 For those investors looking for silver for sale that offers classic, historical imagery rather than visions of nature or popular culture symbols, the Silver St. Helena Spade Guinea Shield is the perfect coin. Issued by the East India Company, the silver coins reflect the basic style of the historic gold guinea. In particular, the coins reflect the most widely produced versions of the gold guinea from the reign of King George III. Now, 2020 1/10 oz Silver St. Helena Spade Guinea Shields are available to you for purchase online at Silver.com.

The Silver St. Helena Spade Guinea Shield was introduced by the East India Company is 2018 with a 1 oz silver coin option. The 2020 release date is the first to offer a 1/10 oz silver coin in the series as well. The basic design concept of the modern Silver Spade Guinea Shield is based on the historic gold guinea issued in England in the 17th and 18th centuries. Those original coins featured the British monarch on the obverse, with the Royal Arms of England on the reverse.

The obverse of 2020 1/10 oz Silver Spade Guinea Shields features the third-generation bust of Queen Elizabeth II. The longest-reigning monarch in British history, this effigy of Her Majesty was created in 1985 by Raphael Maklouf and used until 1997 on British coins. It remains a popular effigy of Her Majesty on a variety of Commonwealth coin issues for bullion collections.

On the reverse side of the 2020 Silver St. Helena Spade Guinea Shields is the Royal Arms of England from the reign of the Hanoverians. Used from the reign of King George I starting in 1714 until the Act of Settlement in 1801, the quartered shield features the combined Three Lions of England and Lion of Scotland in the first quadrant, the golden fleur de lis of France in the second quadrant, the Harp of Ireland in the third quadrant, and the coat of arms for the House of Hanover in the fourth quadrant.

Silver.com customer service is available to assist you with questions at 888-989-7223. We are also available online through our live chat and email address features.