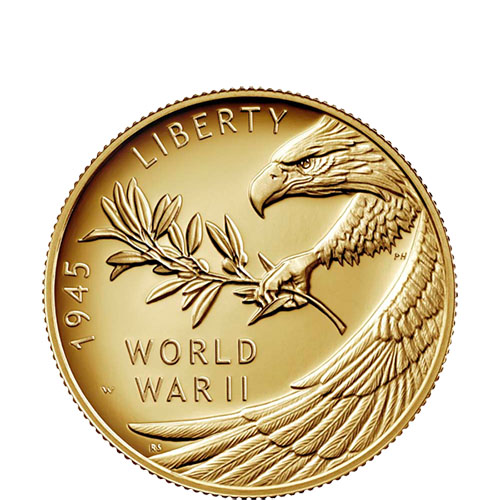 In 2020, the world will pause to mark the end of World War II some 75 years after the hostilities ceased. In May 1945, Nazi Germany surrendered to the Allies as the Red Army stormed the streets of Berlin. In August 1945, Imperial Japanese leaders boarded the USS Missouri battleship to sign a formal declaration of unconditional surrender following the atomic bombing of Hiroshima and Nagasaki. Now, 2020 1/2 oz Gold End of World War II 75th Anniversary Coins are available to you for purchase online at Silver.com.

The pace of World War II’s buildup was a slow burn that had its roots in the conclusion of World War I. The peace deal that ended World War I left Imperial Germany in shambles and deeply in debt. That set the stage for the rise of Adolph Hitler and fascism in Germany, but it was not the only root cause of the war.

A series of interconnected alliances and smaller, regional conflicts around the world would set the stage for the tinderbox that exploded starting in September 1939. These included the Second Sino-Japanese War in the Pacific, the Italian invasion of Ethiopia, and the Spanish Civil War.

The obverse field of the 2020 1/2 oz Gold End of World War II 75th Anniversary Coins includes a depiction of the American bald eagle. Here, the bald eagle is shown flying into the field with its wings spread out and one swooping below the design element. One of its talons holds an olive branch symbolizing peace.

On the reverse face of 2020 Gold End of World War II 75th Anniversary Coins is an image of an olive tree as the sun rises overhead in the background. This design is based on the 1945 World War II Victory Medal.

These 2020 1/2 oz Gold End of World War II 75th Anniversary Coins are available with proof visuals and ship inside of protective capsules. The coin and its capsule come with a maroon presentation box from the US Mint and include a Certificate of Authenticity.

Silver.com customer service is available to assist you with questions about gold for sale at 888-989-7223. Our team is also available to you online through our live chat and email address features.