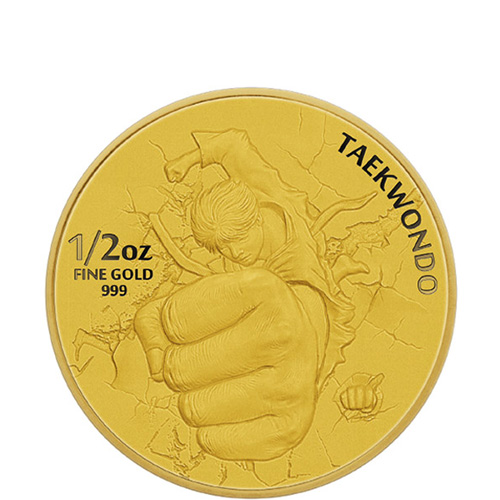 Each 2020 1/2 oz Gold South Korean Taekwondo is offered with a protective plastic capsule or a roll of 20 medals. The gold medals in this listing come from KOMSCO in Brilliant Uncirculated condition.

The obverse side of the 2020 1/2 oz Gold South Korean Taekwondos depicts the Taegeuk with a swirling field around it. The Taegeuk is a century’s old symbol that has been pervasive in Korean written history dating back to the Silla empire. The symbol appeared in written records of the era and was also found in the decorative handle of a sword that was recovered from the grave of Michu of Silla, with the piece dated to the 5th or 6th century CE. Today, the seal is featured prominently on the national flag of the Republic of Korea.

On the reverse field of 2020 Gold South Korean Taekwondos, you will find a design known as the “Punching Man.” This design shows the devastating power of punches in the practice of taekwondo. Punches are integral to taekwondo and must be done not only quickly, but accurately to be effective. In particular, the design captures a fore fist punch, a punch often dealt with enough force to leave fist marks on the target.

If you have any questions, Silver.com customer service is here to help. You can call us on the phone at 888-989-7223, chat with us live online, or simply send us an email.