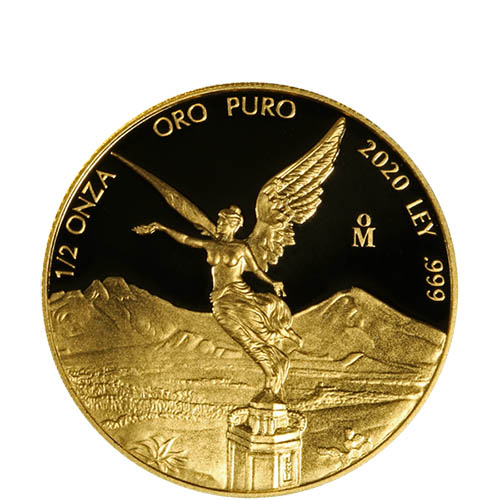 Proof Gold Libertads from the Mexican Mint represent one of the youngest overall collections in the broader Mexican Libertad Series. While the silver bullion coins have been available regularly since 1982, the gold bullion coins have been issued with far less regularity. This is particularly true of the Proof Gold Libertad, a coin that has only been available on an annual basis as of 2005. Now, 2021 1/2 oz Proof Gold Mexican Libertads are available to you for purchase online at Silver.com.

The BU Gold Libertad from the Mexican Mint made its debut in 1981 with 1 oz, 1/2 oz, and 1/4 oz gold options. However, it was another decade before these coins were again issued. That series saw a four-year release from 1991 to 1994 that included additional 1/10 oz and 1/20 oz gold coins. The series was issued again in 2000 and has been available annually from 2002 onward.

Winged Victory graces the obverse side of 2020 1/2 oz Proof Gold Libertads. The effigy of Winged Victory first appeared on national currency in 1921 with the release of the gold Centenario coin, a coin marking the 100th anniversary of Mexican independence. This modernized vision of Victory captures her figure in a three-quarter side profile relief rather than head-on as in the Centenario.

Mexico’s coat of arms is found in the reverse design of 2020 Proof Gold Mexican Libertads. This design is the most recent modernization of the national seal and features a powerful golden eagle as it battles to consume a rattlesnake from on its perch on a cactus.

These 2020 1/2 oz Proof Gold Mexican Libertads are available to you with individual plastic capsules. Each proof coin has a frosted finish on the design element with a mirrored background field to create visual separation between the two.

Silver.com customer service is available to you at 888-989-7223. Alternatively, you can chat with us live online or simply send us an email with your inquiries.