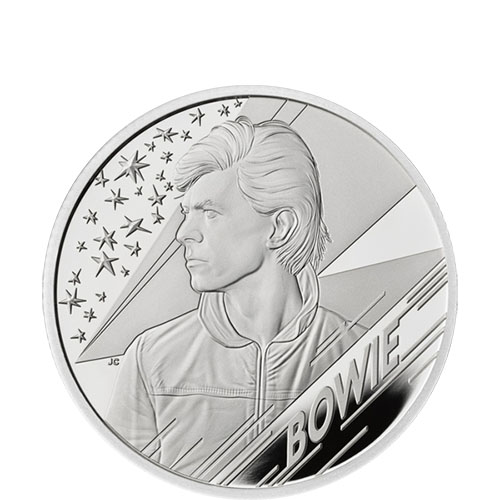 The latest release of the Silver British Music Legends Series at the Royal Mint of England depicts singer David Bowie. He launched his musical career in 1962 and was active right up until his death in 2016 from liver cancer. Now, 2020 1/2 oz Proof Silver British Music Legends David Bowie Coins are available to you for purchase online at Silver.com.

David Bowie was born in Brixton, South London in January 1947. At a young age, he showcased an interest in music and began pursuing a career as a professional musician in 1962. Prior to embarking on his musical career, Bowie had studied art, music, and design. He was active throughout the 1960s, but made his biggest splash in the 1970s.

The obverse of the 2020 1/2 oz Proof Silver British Music Legends David Bowie Coins from the Royal Mint features a bust of Queen Elizabeth II. Her Majesty is shown here in right-profile relief with the George IV State Diadem Crown on her head. This impressive piece from the Crown Jewels has more than 1,300 diamonds in its setting.

On the reverse field of 2020 Proof Silver British David Bowie Coins is an image of the singer-songwriter. He is shown in this portrait from the period of his life spent living and working in Berlin. The background has a lightning bolt flashing through and stars in the upper-left field.

These 2020 1/2 oz Proof Silver British Music Legends David Bowie Coins are housed inside of individual acrylic block displays with a clear cover and stylized background designs of stars. An included Certificate of Authenticity booklet comes with details on the coin release, as well as a background story on the life and career of David Bowie.

Silver.com customer service is available to answer your questions about silver for sale at 888-989-7223. We are also available to you on the web using our live chat and email address features.