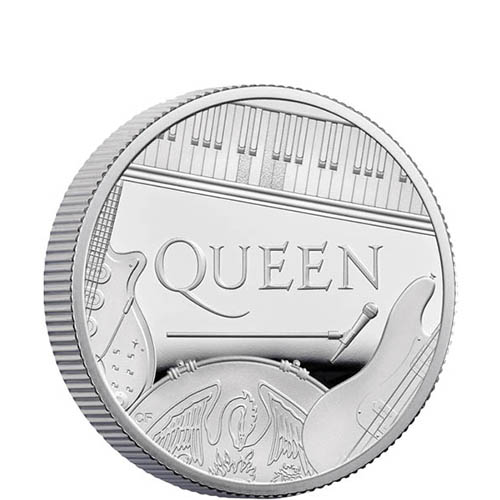 Queen is the group behind some of the most iconic songs in rock history. The British rock band was formed in 1970 and recorded some of the most popular rock songs of all-time. Those titles include “Bohemian Rhapsody,” “We Will Rock You,” “We Are the Champions,” and “Another One Bites the Dust.” Now, the 2020 1/2 oz Proof Silver British Music Legends Queen Coin is available to you for purchase online at Silver.com.

The rock band now known as Queen was formed in 1970 at the urging of Freddie Mercury. May and Taylor were already performing in a group called Smile when Mercury saw them perform and urged a change. He suggested the two experiment with more elaborate staging and recording techniques. The group formed formally when Mercury joined May and Taylor in 1970.

Queen went on to perform together until 1986 when Freddie Mercury was forced to retire. He would later die in 1991 from complications of bronchopneumonia, a complication of AIDS. When John Deacon retired in 1997, May and Taylor carried on alone. Since 2004, May and Taylor have continued touring under the name “Queen +” with Paul Rogers and Adam Lambert providing vocals.

The obverse side of the 2020 1/2 oz Proof Silver British Music Legends Queen Coin includes an effigy of Queen Elizabeth II. This right-profile bust of Her Majesty was created in 2015 by Jody Clark for the Royal Mint. It depicts the Queen with the George IV State Diadem Crown on her head and her figure in right-profile relief.

On the reverse face of 2020 1/2 oz Proof Silver British Music Legends Queen Coins, you will find images of the musical instruments that members of the band would perform with on a regular basis. These include two guitars, a keyboard, and a drum. There is a microphone stand on this side that would have been used by the vocalists in Queen.

These 2020 1/2 oz Proof Silver British Music Legends Queen Coins are housed inside of acrylic boxes with a clear lid that is meant to replicate the appearance of vinyl packaging. The coins come with a Certificate of Authenticity and themed shipper that includes photographs of the four original members of Queen.

Silver.com customer service is available to answer your questions about buying silver at 888-989-7223. You can also chat with us live online or send us an email.