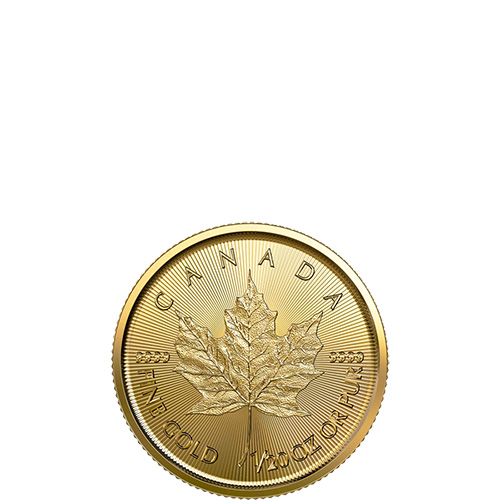 The Gold Maple Leaf from the Royal Canadian Mint is one of the world’s leading gold bullion coins. Introduced in 1979, the only series that has been around longer is the Gold Krugerrand from the South African Mint. Gold Canadian Maple Leaf coins are offered in six weights each year, with the 1/20 oz coin representing the smallest Troy ounce weight available. Today, 2020 1/20 oz Gold Canadian Maple Leafs are available to you online at Silver.com.

All of the 2020 1/20 oz Gold Canadian Maple Leafs in this listing come with protective plastic flip for coins purchased individually or sealed sheets of 40 coins for bulk orders. All coins in this listing are in Brilliant Uncirculated condition from the mint.

As of 2014, Gold Maple Leafs have added security elements in the design to combat counterfeiting. The first option introduced was the use of radial lines in the background field on both sides of the coin. That was followed by the addition of a maple leaf privy mark on the reverse that has the last two digits from the date mark visible within it, but only under magnification.

The obverse of 2020 1/20 oz Gold Canadian Maple Leafs features Queen Elizabeth II. This right-profile bust of Her Majesty is the fourth iteration during her reign and was created in 2003 by Susanna Blunt.

On the reverse face of 2020 1/20 oz Gold Maple Leafs is a depiction of the sugar maple leaf. This iconic design was developed for the first Gold Maple Leaf introduced in 1979 and created by Walter Ott. His sugar maple leaf design is so popular the RCM has not altered its appearance and now features it on the silver, platinum, and palladium versions of the coin.

Please don’t hesitate to contact Silver.com with your questions. We are available on the phone at 888-989-7223, online using our live chat, and via our email address.