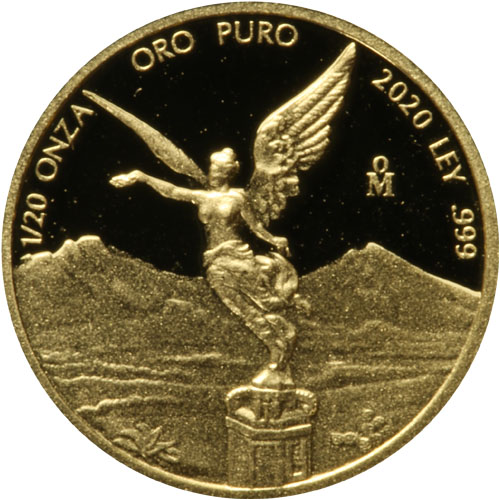 The Mexican Mint introduced its Libertad bullion coins in the early 1980s. The silver and gold coins for sale in this series come in BU, Proof, and Reverse Proof options across both metals, with Antique and Proof-like options available in the silver series as well. A unique facet of this series is the use of 1/2 oz, 1/4 oz, 1/10 oz, and 1/20 oz coins each year in both the silver and gold collections, though all four fractional-ounce coins are featured only in BU and proof. The smallest coin in the series, you can now purchase 2020 1/20 oz Proof Gold Mexican Libertads online at Silver.com.

On the obverse of 2020 1/20 oz Proof Gold Mexican Libertads is an image known as Winged Victory. This female allegory represents the goddess of victory from Greek and Roman mythology and is a symbol of Mexico’s victory over Spain in its revolutionary war. The female figure has powerful wings on her back, holds a wreath crown in her right hand, and clutches broken chains in her left hand. The mountain peaks of Popocatepetl and Iztaccihuatl are visible in the distant background field.

The reverse face of 2020 Proof Gold Mexican Libertads comes with the modern image of the Mexican coat of arms. The seal was last modernized in 1968 and is the 10th symbol of the modern state. This seal and all others are inspired by the image of an eagle devouring a rattlesnake from the Codex Mendoza, a design cataloged in 1541 by Aztec scholars charting the visual history of their emperors and empire.

These 2020 1/20 oz Proof Gold Mexican Libertad Coins are available to you with individual acrylic capsules. The coins have frosted designs with mirrored background fields.