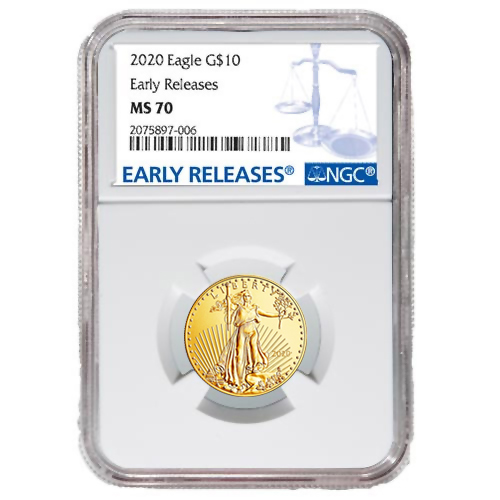 The United States Mint’s official gold bullion coin series is the Gold American Eagle. Introduced in 1986, the Gold Eagle marked a special moment in the history of US coining with the return of gold coins to production. Even though these coins are not for circulation, their arrival marked the end of a 50-plus-year break in American gold coining. Now, 2020 1/4 oz Gold American Eagles are available to you for purchase online at Silver.com in perfect condition.

Lady Liberty is featured on the obverse side of the 2020 1/4 oz Gold American Eagle Coins as designed by Augustus Saint-Gaudens. This image was created in 1907 and features Liberty in front-facing relief as she walks toward the viewer with a large torch in her right hand and an olive branch in her left hand.

American bald eagles feature on the reverse of all American Eagle Series bullion coins. The 2020 1/4 oz Gold Eagles have Miley Busiek’s family of American bald eagles in the design field. This includes a male eagle in flight above the nest as a female offers shelter to a hatchling in the nest.

These 2020 1/4 oz Gold American Eagles are Mint State 70 coins. Known as perfect specimens, each one has full, original mint luster and no detracting flaws. Early Release specimens were received by the NGC for grading within the first 30 days of initial release by the US Mint.

We encourage Silver.com customers to call us with questions about gold for sale at 888-989-7223. You can also connect with us live online using our live chat or simply send us an email.