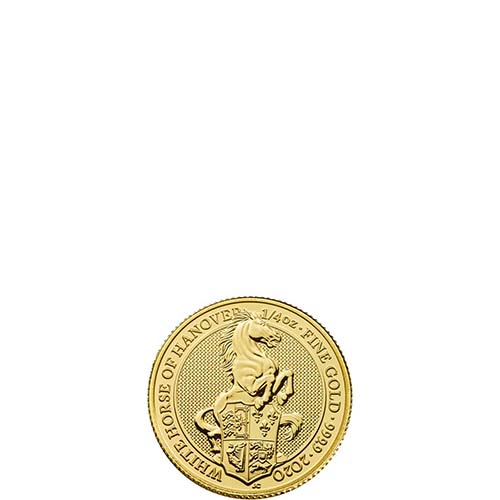 The design of the Royal Arms of England as featured on the reverse of the 2020 1/4 oz Gold British Queen’s Beast White Horse Coin came to England through Elector George of Hanover, the man who would go on to reign as King George I of England. However, he was not the only monarch to carry this specific Royal Standard.

King George I came to the throne at an advanced age. He was 54 when he ascended the throne and had already been the Elector of Hanover at that point for nearly 20 years. He would reign as King of England until his death at the age of 67 in June 1727. His Royal Arms, however, would be carried without change by King George II from 1727 to 1760 and later by King George III from 1760 until early 1801.

Queen Elizabeth II is depicted in right-profile relief on the obverse of the 2020 1/4 oz Gold British Queen’s Beast White Horse Coin. Her Majesty is shown here in the fifth-generation design for British currency at the age of 89 wearing the George IV State Diadem Crown. An interesting fact, King George IV was the last member of the House of Hanover to use the White Horse in the Royal Arms of England, but was not the last member from that house to rule England.

In the reverse design, a powerful White Horse of Hanover stands on its hind legs behind the Royal Arms of King George I. The quartered shield of George I features the Three Lions and Lion of Scotland in the first quarter, the French fleur de lis in the second quarter, the Harp of Ireland in the third quarter, and the Arms of Hanover in the fourth.

These 2020 1/4 oz Gold British Queen’s Beast White Horse Coins are available to you in Brilliant Uncirculated condition. The coins ship individually in flips, in multiples of 25 with mint tubes, or in multiples of 500 with Monster Boxes.

Silver.com encourages you to call 888-989-7223 with questions about gold for sale. You can also connect with us online using our live chat and email.