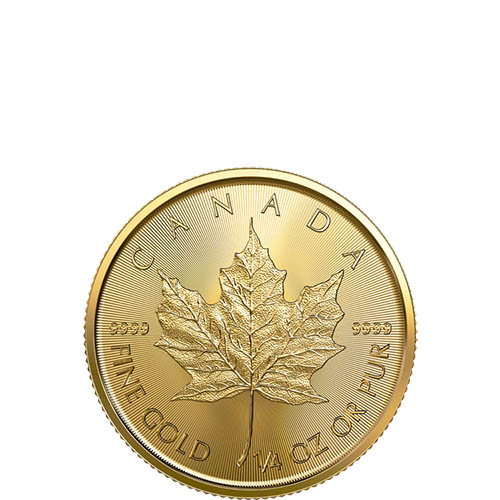 Gold Maple Leafs from the Royal Canadian Mint offers the same designs on the obverse and reverse each year, focusing on the reigning monarch of Commonwealth nations and the official emblem of Canada, the sugar maple leaf. Now, 2020 1/4 oz Gold Canadian Maple Leafs are available to you for purchase online at Silver.com.

While the Gold Canadian Maple Leaf has used the same design of the sugar maple leaf on the reverse side each year, the effigy of Queen Elizabeth II on the obverse has been modified three times during the history of this program. Walter Ott’s 1979 sugar maple leaf design, on the other hand, remains unchanged.

Now, the obverse of 2020 1/4 oz Gold Canadian Maple Leafs features the fourth-generation portrait of Her Majesty at the age of 79. This was designed in 2003 by Susanna Blunt and rolled out on Canadian coins beginning in 2004 and 2005. This is the first portrait during Her Majesty’s reign to depict the Queen without a crown. The background field on this side has radial lines as a security feature to combat counterfeiting.

For the reverse, 2020 1/4 oz Gold Canadian Maple Leafs include the sugar maple leaf. This iconic image from Ott also features on the silver, platinum, and palladium versions of the Maple Leaf bullion coins. The reverse has two security features. It also boasts radial lines and comes with a micro-engraved maple leaf boasting the final digits of the date mark as “20.”

These 2020 1/4 oz Gold Canadian Maple Leafs ship in Brilliant Uncirculated condition from the mint. Individual gold coins come with a protective plastic flip while multiples of 20 coins are shipped inside of sealed sheets.

The Royal Canadian Mint was founded in 1908 to provide independent coinage for Canada and the ability to refine metals found in the Yukon Territories in the late-19th and early 20th centuries. The Ottawa Mint strikes all bullion coins, while the Winnipeg Mint produces circulation currency for the country.

Silver.com encourages customers to call us with questions at 888-989-7223. You can contact us online as well using our live chat feature or email address.