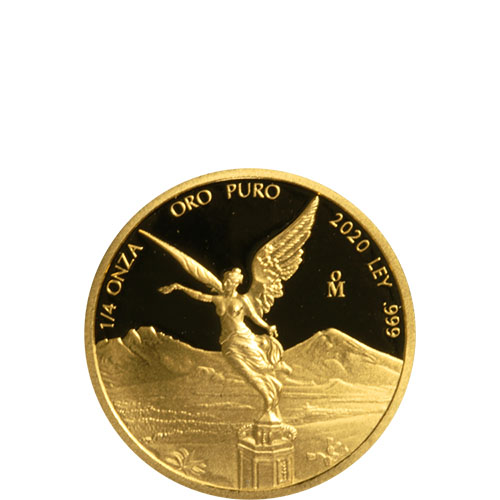 The gold for sale in the Gold Mexican Libertad Series comes in three different versions and fight weights. The series started in 1981 as an investment-grade coin and continued in 1983 with the proof series. In 2018, the reverse-proof series was added to the collection. Of these three, only the BU and Proof coins are available in all five weights. Right now, 2020 1/4 oz Proof Gold Mexican Libertads are available to purchase online at Silver.com.

Proof Gold Libertad Series coins were first issued in 1983 with a 1 oz gold coin available. The next release of the coins came in 1989 with 1/2 oz gold coin. In 2004, the Mexican Mint introduced the coin that now has the longest-running continuous issue in the series, the 1/4 oz proof gold coin. While the 1 oz, 1/2 oz, and 1/4 oz coins have all been issued 17 times as of 2020, the 1983 and 1989 issues of the 1 oz and 1/2 oz coins mean there have not been 17 consecutive issues in those weights. With the 2005 start of annual production, only the 1/4 oz gold coin has been available in all years since. With that said, none of the coins in this series were issued in 2012.

The obverse side of 2020 1/4 oz Proof Gold Mexican Libertads comes with the statue of Winged Victory. Her effigy first featured on a Mexican coin in 1921 with the release of the Gold Centenario, a coin marking the 100th anniversary of Mexican independence. It depicts the Mexican version of the ancient Roman and Greek goddesses for victory. She holds a wreath crown in one hand and a set of broken chains in the other.

On the reverse face of the 2020 Proof Gold Mexican Libertad is a depiction of the national coat of arms. Mexico’s coat of arms was last modified in 1968 by Francisco Eppens Helguera. It shows a golden eagle in left-profile relief as it wrestles with a rattlesnake on the perch of a prickly pear cactus.

If you have any questions, Silver.com is here to help. Our customer service team is available at 888-989-7223, online using our live chat, and via our email address.