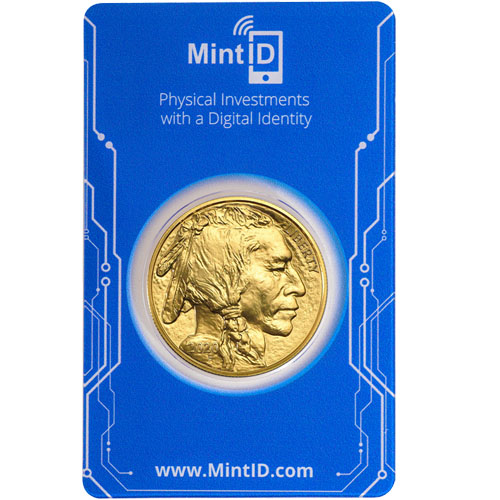 Designed in 1913, the images from the Buffalo Nickel are some of the most common replications on modern bullion products. Found on silver rounds, silver rounds, and copper rounds, the Buffalo Nickel’s most popular reimagination in the 21st century is that of the Gold American Buffalo bullion coin from the United States Mint. Right now, 2020 1 oz Gold American Buffalos are available to purchase online at Silver.com with a MintID certificate card.

Each of the 2020 1 oz Gold American Buffalos in this product listing at Silver.com is individually packaged inside of a protective certificate card courtesy of MintID. This certificate card includes an NFC microchip that is AES-128 bit encrypted, the same level of encryption the US federal government uses for sensitive data.

MintID uses NFC microchips to package major bullion coins such as the Gold American Eagle and Gold American Buffalo in a secure manner. Each coin is individually packaged in a certificate card that links that individual coin to a digital profile. By scanning the NFC microchip in your coin’s card using your smartphone and the MintID app, you can instantly authenticate the weight, purity, metal content, and date of issue for an individual coin. The MintID app requires your device to be running iOS 13.0 or later or Android 4.2 or later.

James Earle Fraser created the design of the Native American figure that features on the obverse of the 2020 Gold American Buffalo. This right-profile image was created by Fraser in 1913 using three real-world indigenous tribal leaders of the early 20th century as inspiration for the look of his character. Fraser combined the facial features of the three individuals to create the look of a stoic tribal figure.

As for the reverse of 2020 1 oz Gold American Buffalos, Fraser depicts an American bison standing on a mound of dirt in left-profile relief. His inspiration for this design came from Black Diamond, a bison living at New York City’s Central Park Zoo in the early 20th century.

If you have any questions about gold for sale, please feel free to reach out to Silver.com customer service. Our team is available at 888-989-7223, online using our live chat, and via our email address.