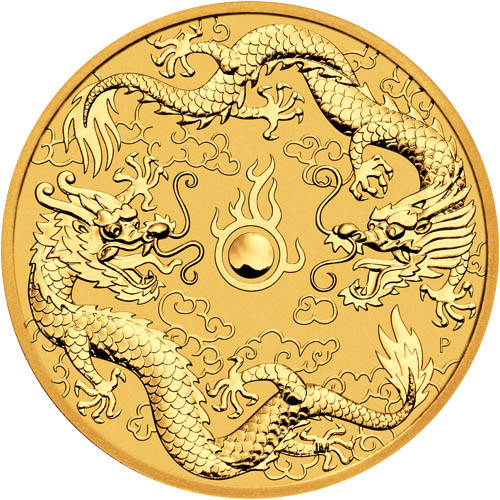 The Australian Dragon coin series from the Perth Mint has featured a variety of animal combinations with a flaming pearl at the center of the design concept. Issues in this series include the Dragon and Phoenix, Dragon and Tiger, and the beautiful Double Dragon release. Right now, the 2020 1 oz Gold Australian Double Dragon Coins are available to purchase online at Silver.com.

Each 2020 1 oz Gold Australian Double Dragon Coin in this product listing comes to you with a protective plastic capsule for individual specimens. Orders containing multiples will ship inside of either sealed rolls of 20 coins or boxes of 100 coins containing a total of five rolls. All coins are available in Brilliant Uncirculated condition.

The Double Dragon design is a play on the importance of the dragon symbol in Chinese culture and mythology. While Western lore painted the dragon as a bringer of death and source of evil, the Chinese view dragons as exuberant, playful, and benevolent creatures. Dragons can live on land, under the water, and in the air. Though they have no wings, they can undulate through the sky and serve as a symbol of abundant life, strength, and prosperity.

On the obverse of the 2020 1 oz Gold Australian Double Dragon Coin is a right-profile effigy of Queen Elizabeth II. This is the sixth-generation portrait of the Queen on Australian coinage and it was created in 2015 by Jody Clark for the Royal Mint of England. It depicts the Queen at the age of 89 wearing the George IV State Diadem crown, a crown worn primarily for the State Opening of Parliament.

The reverse field of 2020 Gold Australian Double Dragons includes the image of two slithering Chinese dragons moving around the outside edge of the design field. The two beasts are in hot pursuit of the flaming pearl, a symbol of infinite wisdom.

The Perth Mint is the oldest operating mint in Australia. Originally founded as part of the Royal Mint system on the continent, it is now owned by the state government of Western Australia and operates independently of the Royal Australian Mint.

If you have questions, Silver.com customer service can help. We are available at 888-989-7223, online using our live chat, and via our email address.