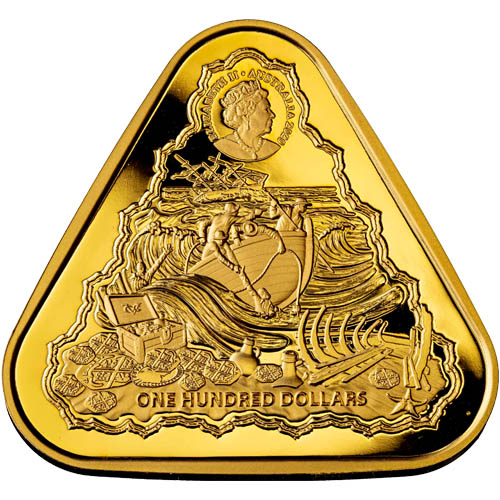 For the second release of the Shipwreck Series at the Royal Australian Mint, the Vergulde Draeck is featured. Constructed in 1653 for the Dutch East India Company in Amsterdam, the ship sailed between the Netherlands and Batavia, Indonesia, several times before meeting its fate off the coast of Australia in 1656. Now, 2020 1 oz Gold Australian Shipwreck Vergulde Draeck Coins are available to you for purchase online at Silver.com.

On 28 April 1656, the ship struck a coral reef off the coast of Western Australia between the towns of Seabird and Ledge Point. The ship swiftly sank to the ocean floor with 118 of the 193 crew aboard dying during the sinking process. The initial 75 survivors that made it to shore sent a party of eight crew members to Batavia in a barge, a trek that took 41 days to cover 1,400 nautical miles. The eight individuals made it to Batavia, but four subsequent rescue missions never located any of the other survivors back on the Australian continent.

On the obverse of the 2020 1 oz Gold Australian Shipwreck Vergulde Draeck Coin is the effigy of Queen Elizabeth II at the top of the design triangle. The effigy is the sixth of the Queen to feature on Australian coins and below it is a scene that no doubt played out that fateful April evening in 1656 as the survivors struggled ashore as the Vergulde Draeck sank in the distance.

The reverse of 2020 Gold Australian Shipwreck Vergulde Draeck Coins come with the upright image of the ship as it sails calm ocean waters. The three-masted vessel went down with a cargo of eight boxes of silver coins valued at 78,600 guilders. The ship also had trade goods onboard valued at 106,400 guilders.

2020 1 oz Gold Australian Shipwreck Vergulde Draeck Coins are available inside of individual protective plastic capsules. Each capsule is specially designed to fit the triangular shape of the bullion coins in this series. All coins are available in Brilliant Uncirculated condition.

Silver.com encourages customers to call us at 888-989-7223 with questions. You can also chat with us live online or email us.