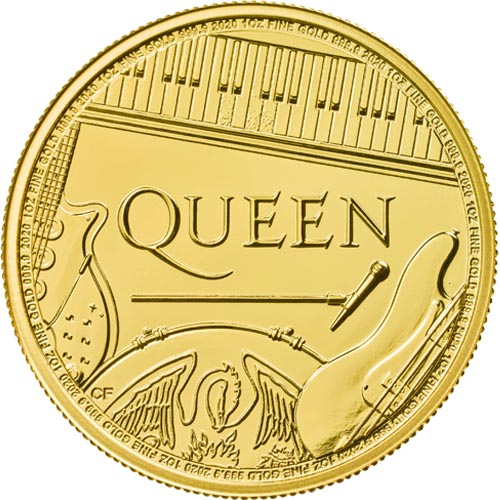 There’s no shortage of gold for sale from the Royal Mint of England. Chief among the new options is the British Music Legends Series that kicks off with a design honoring the British rock band Queen. Formed in London in 1970, Queen went on to dominate the charts through the 1970s and 1980s, and its music remains a staple of sporting events around the world in the 21st century. Today, the 2020 1 oz Gold British Music Legends Queen coin is available to you online at Silver.com.

For sports enthusiasts, it is almost impossible to believe that the music of Queen hasn’t gotten you up on your feet and cheering. Queen rock ballads such as “We Will Rock You,” “We Are The Champions,” and “Another One Bites the Dust” have become soundtrack staples at arenas, stadiums, and ballparks around the world.

All of the 2020 1 oz Gold British Music Legends Queen coins are offered to you today at Silver.com in Brilliant Uncirculated condition from the Royal Mint of England. Each of the coins is available individually inside of a plastic capsule. The mintage of 2,500 gold coins makes this Queen release far more unique in number than the silver bullion coin and its mintage of 25,000 silver coins.

On the obverse of 2020 1 oz Gold British Music Legends Queen coins is the latest effigy of Queen Elizabeth II. During her long reign, four previous portraits of the Queen have featured on British denominations. This fifth portrait was created in July 2015 by Jody Clark and debuted on British coins in 2016. It depicts the Queen in right-profile relief with the George IV State Diadem Crown on her head.

The reverse side of the 2020 Gold British Music Legends Queen coins comes with a design featuring the musical instruments used by the members of the group. The band name “Queen” is inscribed in the center, with a keyboard above, a microphone and stand immediately below, and two guitars with a drum at the bottom of the design field.

Please feel free to reach out to Silver.com with your questions about these coins. You can call us on the phone at 888-989-7223, chat with us live on the web, or email us directly.