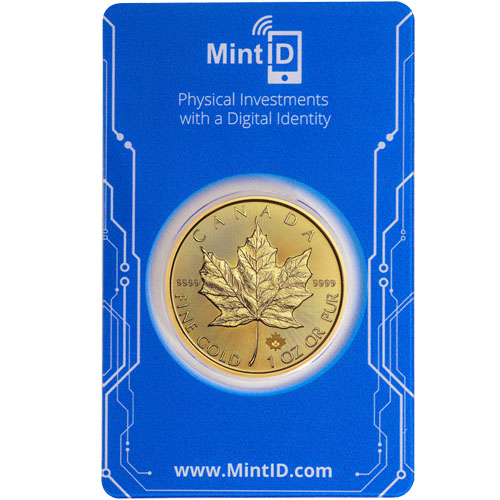 The Gold Maple Leafs from the Royal Canadian Mint represents a leading collection of gold for sale to investors. Introduced in 1979, the Gold Maple Leaf has the same designs on the obverse and reverse each year, with only the effigies of Queen Elizabeth II on the obverse changing over the course of time. Now into its fifth decade of production, the 2020 Gold Maple Leaf leads the series into a new decade. 2020 1 oz Gold Canadian Maple Leafs are available to you for purchase online at Silver.com in MintID certificate cards.

MintID certificate cards are secure, encrypted packages that guarantee the authentication of the specimens. Each card has a tamper-proof, AES-128 bit encrypted NFC microchip. Using the MintID app on your smartphone, you can scan the microchip and immediately view the unique digital profile of each specific coin as stored in the cloud by MintID. The MintID app requires iOS 13.0 or later and Android 4.2 or later.

The obverse side of 2020 1 oz Gold Canadian Maple Leafs features the right-profile bust of Queen Elizabeth II. Designed in 2003 by Susanna Blunt, this image of Her Majesty is just the second from the Royal Canadian Mint to be designed by a Canadian artist and the first since the reign of King George VI to depict the monarch without a crown.

These 2020 1 oz Gold Canadian Maple Leafs are packaged individually inside of the MintID certificate card. The tamper-proof microchip will render a “tampered” or invalid result if any attempts are made to mess with the coin’s certificate card.