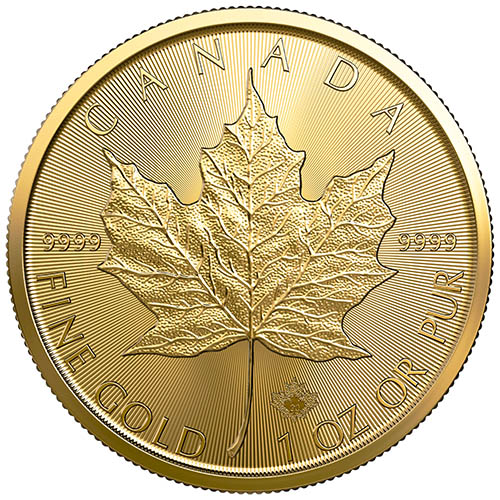 There are few gold coins for sale in the world today as popular as the Gold Canadian Maple Leaf. Introduced in 1979, it was just the second coin of its type behind the Gold South African Krugerrand and it became the world’s first 24-karat gold bullion coin when its purity level was increased in November 1982. Right now, 2020 1 oz Gold Canadian Maple Leaf Coins are available to purchase online at Silver.com.

Each 2020 1 oz Gold Canadian Maple Leaf in this listing ships to you individually with a protective plastic flip. For orders of multiples, Gold Canadian Maple Leafs ship in tubes of 10 coins or Monster Boxes of 500 coins that house a total of 50 separate tubes. All 2020 Gold Maple Leafs in this listing are in Brilliant Uncirculated condition. These coins include radial lines on both sides of the coin and a laser-etched maple leaf privy as security features.

When the Gold Canadian Maple Leaf debuted in 1979, the only other major gold bullion coin investors could purchase was the Gold South African Krugerrand. The Royal Canadian Mint moved aggressively in the early years to expand and improve on the Gold Maple Leaf Series. From 1979 to 1982, the coin was only available in 1 oz gold with .999 fine gold content. In November 1982, the metallic fineness not only increased to .9999 fine gold, but the series gained 1/4 oz and 1/10 oz options. A 1/2 oz coin was added in 1986, followed by a 1/20 oz coin in 1994 and a 1 Gram coin in 2014 to round out the series as it is now commonly offered.

On the obverse of 2020 Gold Canadian Maple Leafs is a portrait of Queen Elizabeth II. This right-profile bust of the Queen of England was created in 2003 by Susanna Blunt. It is the first portrait of a monarch on Canadian coins since the reign of King George VI not to feature a crown on the monarch’s head.