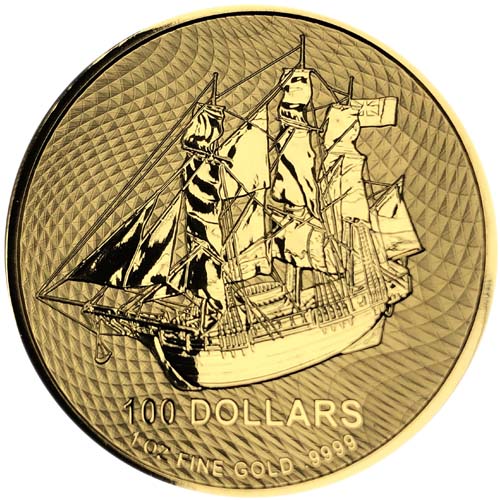 If you buy gold issued by the Cook Islands, one of the most popular coins from the island nation is the Bounty Series. Available in both silver and gold, the coins feature a bust of Queen Elizabeth II on one side and the HMS Bounty on the reverse field of the coins. The 2020 release continues the use of these beautiful gold coin designs. Today, 2020 1 oz Gold Cook Islands Bounty Coins are available to you online at Silver.com.

Built in 1784 and purchased by the Royal Navy in 1787, the HMS Bounty is best known for the 1789 mutiny that occurred aboard the ship on its first-and-only mission for the Royal Navy. The navy had purchased the private merchant ship for use in a special scientific mission to collect breadfruit plants from Tahiti to see if the inexpensive plant could be grown easily in the West Indies as a source of cheap food for the slave laborers of British colonies in the region. The ship would never complete its mission.

All of the 2020 1 oz Gold Cook Islands Bounty Coins in this listing are available to you for purchase in Brilliant Uncirculated condition. The coins are housed individually inside of protective plastic capsules.

On the obverse of 2020 Gold Cook Islands Bounty Coins is an effigy of Queen Elizabeth II. Her Majesty is captured here in right-profile relief in a design created back in 1998 for British coinage. Ian Rank-Broadley developed this design for the mint and it featured on British coins from 1998 to 2015. It has been in use on the coinage of South Pacific Commonwealth nations since 1999.

The reverse field of 2020 1 oz Gold Cook Islands Bounty Coins shows the HMS Bounty. The ship was built as the Bethia and was a collier, or bulk cargo ship. The Royal Navy renamed the ship the Bounty. It had a displacement of 215 tons with three masts and full rigging.

The Mutiny on the Bounty is one of the best-known stories of the high seas. The mutiny was led by Fletcher Christian more than a year into the ship’s mission. After a 10-month voyage to Tahiti and five months on the island harvesting breadfruit plants, more than half the men did not wish to leave the region and launched a mutiny rather than return. The mutineers jettisoned the ship’s captain and his loyal crewmembers. Eventually, the mutineers sailed to what is now Pitcairn Island where the ship was purposely burnt to hide its location.

Please feel free to contact Silver.com with any questions. You can call us at 888-989-7223, chat with us live online, or email us directly.