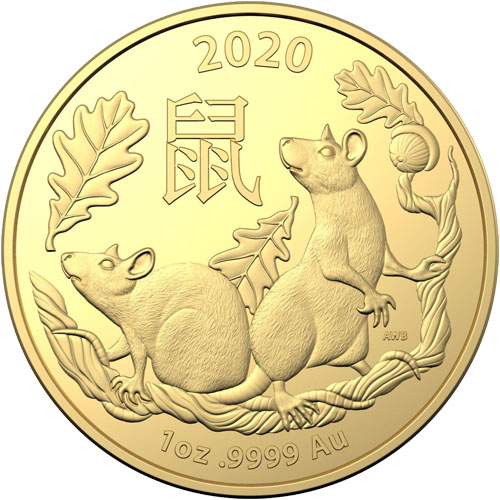 The Chinese Lunar Calendar, also known as the Zodiac or Shengxiao, is a 12-year cycle that includes a different animal for each of the 12 years in the cycle. The animals represent different characteristics and traits for the individuals born under those signs. In each case, the animal is viewed as having the same characteristics. Those born under the sign of the rat, for example, are said to be clever and cunning, just like the animal itself.

In the 12-year cycle of the Zodiac, the Year of the Rat comes first in the cycle. The rat was chosen first because it arrived first to a meeting with the Jade Emperor. The rat could easily have been second to the ox, but it hitched a ride with the ox to the meeting to facilitate an easier crossing at a river. Just before arriving, the rat jumped off the ox to cross the line first.

On the obverse face of 2020 1 oz Gold Royal Australian Mint Year of the Rat Coin is the effigy of Queen Elizabeth II. This right-profile portrait of Her Majesty was created in 1998 by Ian Rank-Broadley and depicts the Queen wearing the Girls of Great Britain and Ireland Tiara. This is the fifth-generation design to feature on Australian coinage. Around the design field is a Zodiac wheel with each of the 12 animals featured, including the rat at the top of the wheel.

The reverse side of the 2020 1 oz Gold Royal Australian Mint Year of the Rat Coin comes with a depiction of two rats together on an oak branch. The rats and the oak branch are accompanied by three oak leaves and a single acorn. The numbers two and three are considered lucky in Chinese mythology.

Silver.com customer service is available to answer your questions at 888-989-7223. You can also contact us online through our live chat and email address features.