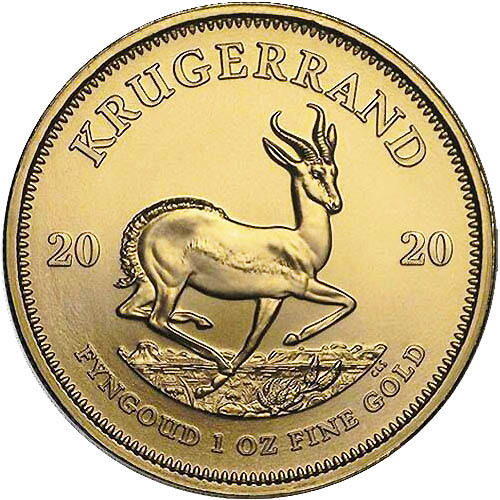 When you’re the first gold bullion coin available in the world, there is a lot of space to set records and trends. The Gold Krugerrand was the first 1 oz gold bullion coin for private ownership when it was introduced in 1967. The coin was also the first, and remains the only, without a face value. Today, 2020 1 oz Gold South African Krugerrands are available to you online at Silver.com.

Gold Krugerrand coins are named for the national denomination in South Africa and the man featured on the obverse of the coins. Paul Kruger was the first President of the South African Republic when it was formed in 1883 and he served in office until 1900. The modern denomination for South Africa is the Rand. As such, the bullion coin combines the two names to come up with Krugerrand.

All 2020 1 oz Gold South African Krugerrands are available to you in Brilliant Uncirculated condition. The coins are available individually inside of protective plastic flips or in multiples of 10 with an acrylic tube.

The obverse of 2020 1 oz Gold South African Krugerrands features the image of Paul Kruger. This left-profile bust of the former president showcases his familiar beard and is based on an 1892 portrait. Though it was designed for the Krugerrand in 1967 by Otto Schultz, his inspiration came from the 1892 portrait that was created to feature Kruger on the South African Pound denominations of the late 19th century.

On the reverse face of 2020 Gold South African Krugerrands is the image of the Springbok antelope. A common species found throughout the southern tip of the African continent, the Springbok is the official emblem of modern South Africa. This design was created in 1967 by Coert Steynberg. Both designs on the Krugerrand were modernized in 1984.

Please feel free to reach out to Silver.com if you have any questions. You can call us at 888-989-7223, chat with us live online, or email us directly.