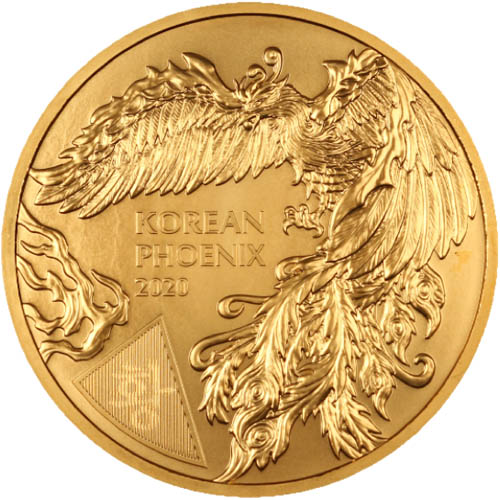 The Phoenix is the best-known mythical bird from antiquity. It is said to be immortal, in a manner of speaking. The Phoenix has the power of regeneration, often bursting into flames at the end of its life and regenerating anew from the ashes of the old bird. Used throughout antiquity and into the modern era, the Phoenix is an important symbol in Korea where it serves in the presidential seal. Now, 2020 1 oz Gold South Korean Phoenixes are available to you for purchase online at Silver.com.

Phoenixes first appeared in Asian cultures 8,000 years ago in China during the Hongshan Neolithic period. The Phoenix first appeared on jade and pottery designs, but came to be associated with power. As a symbol of power it was wielded by emperors. It was also used in everyday design and art.

People would use the phoenix to decorate homes as a symbol of loyalty and honesty among the people living in the home. In Korean culture, the Phoenix is known as the Bong-Hwang, and as of the 1970s it has been used in the Presidential Seal and Presidential Standard of the Republic of Korea, the modern nation of South Korea.

For the new 2020 South Korean Phoenixes, KOMSCO has introduced an altered version of its traditional latent security image. For starters, the security image now has the shape of a slice of pie, rather than the traditional circular shape. More importantly, it is physically engraved onto the surface of the coin rather than using visual elements to create the security feature. As you change the viewing angle, you will see either “Bong” or “Hwang.”

On the reverse face of 2020 Gold South Korean Phoenixes is an image of numerous Phoenixes. The two birds in the center are based on the Presidential Seal in which two birds are found in side-profile relief facing one another. The Taeguk, South Korea’s official emblem, is in the center and there is a third Phoenix overhead.

These 2020 1 oz Gold South Korean Phoenixes are available inside of protective plastic capsules for shipping. All specimens are in Brilliant Uncirculated condition from KOMSCO.

Silver.com customer service is available at 888-989-7223 if you have questions about gold for sale. Alternatively, you can chat with us live online or email us directly.