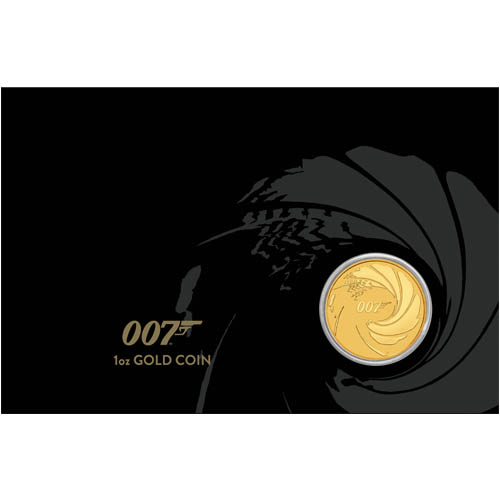 Any quantity available for $149.99 per coin over spot!

The Perth Mint is one of the leading mints around the world producing coins honoring the upcoming James Bond film from Eon Productions. The 25th film in the series is set for release in 2021 after the COVID-19 pandemic resulted in its delayed release to theaters as originally planned in the spring of 2020. Today, 2020 1 oz Gold Tuvalu James Bond Series 007 Coins are available to you online at Silver.com.

Author Ian Fleming created the British secret agent now known around the world in 1953. Mr. Fleming featured the James Bond character in 12 novels and two short-story collections. In 1962, the James Bond character jumped off the pages and onto the big screen in the first feature film of the franchise from Eon Productions. Fleming would pass away two years later in 1964 with no idea how massively popular his character was going to become in the next six decades.

All of the 2020 1 oz Gold Tuvalu James Bond Series 007 Coins available here are packaged in presentation cards. The black presentation card has the famous gun-barrel design as it hones in on the coin in its capsule space in the lower-right field of the coin. Lucas Bowers designed the coin in this 007 Series release based on the original design created for the films by Joseph Caroff.

On the obverse side of 2020 Gold James Bond Series 007 Coins, you will find the most popular right-profile portrait of Queen Elizabeth II. Her Majesty is featured here in a design that served as the fourth-generation effigy of British coins from 1998 to 2015. Ian Rank-Broadley created this portrait for the Royal Mint initially, but it has since been used on coinage of the Perth Mint and Royal Australian Mint in Australia, and by the New Zealand Mint for nations such as Niue, Tuvalu, and the Cook Islands.

The reverse face of the 2020 1 oz Gold Tuvalu Series 007 Coins features the gun-barrel design that has featured at some point in the opening sequence of all Bond films. The gun barrel centers in on the 007 logo that is famously end-capped by a gun.

Please don’t hesitate to reach out to Silver.com if you have any questions when buying gold. Our customer service team is available to help you on the phone at 888-989-7223, online through our live chat, and using our email address.