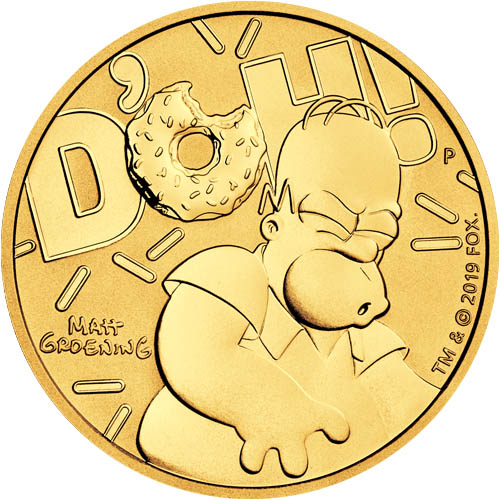 The Perth Mint offers a wide-ranging series of silver and gold for sale that celebrates the unrivaled prominence of The Simpsons. A pop-culture phenomenon recognized around the world today, The Simpsons started as a simple 30-second cartoon sketch on The Tracey Ullman Show in 1987 and has grown to enjoy worldwide popularity in the decades since. Now, 2020 1 oz Gold Tuvalu The Simpsons Homer Coins are available to you for purchase online at Silver.com.

The Simpsons earned its own 30-minute episodes on Fox starting in 1989. The yellow cartoon family lives in the fictional US city of Springfield and consists of father Homer, mother Marge, son Bart, and daughters Lisa and Maggie. The cast of characters is very diverse and includes countless different characters that appear regularly throughout the series.

Since the debut of The Simpsons on Fox, more than 700 episodes of the animated show have featured on TV. As of 2018, the series is now the longest-running animated primetime television show and is featured in 20 different languages across 60 countries around the globe.

The reverse of 2020 1 oz Gold Tuvalu The Simpsons Homer Coins includes the family patriarch himself, Homer Simpsons. He is in the center of the design field with his popular catchphrase “D’OH” above his head. The “O” in the catchphrase is formed by a donut, Homer’s favorite treat, with a small bite taken out of the donut. Sprinkles from the pastry are scattered throughout the background field and you will notice the signature of series creator Matt Groening on this side along with the “P” mint mark of the Perth Mint.

On the obverse of 2020 Gold Tuvalu The Simpsons Homer Coins is the effigy of Queen Elizabeth II. Her Majesty is depicted here in right-profile relief. This design was created by Ian Rank-Broadley in 1998 and featured on British coins until 2015. It continues as a popular design on the obverse of Commonwealth coins in nations such as Tuvalu and Niue.

These 2020 1 oz Gold Tuvalu The Simpsons Homer Coins are available to you individually with protective acrylic capsules. The coins are proof specimens with frosted design elements and mirrored background fields.