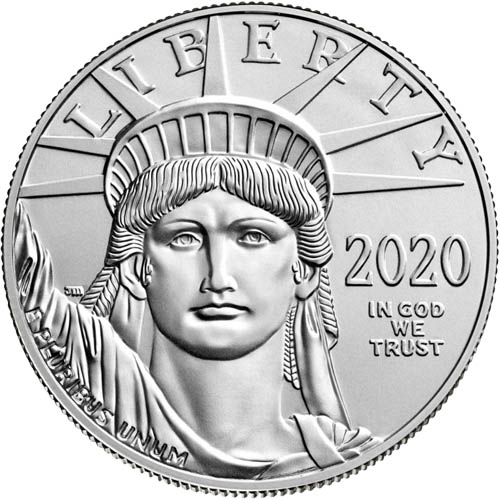 The American Eagle Series from the United States Mint represents the official bullion coin collection for America. The series launched in 1986 with gold and silver coin options and expanded for the first time in 1997 to include the Platinum Eagles. These coins were the first and only in the series not to use historic images of Liberty from previous US circulation coins and have their own unique American bald eagle designs. Today, 2020 1 oz Platinum American Eagle Coins are available to you online at Silver.com.

Platinum American Eagle coins were first released in 1997 with bullion and proof options. Initially, both versions of the coin had 1 oz platinum coins offered alongside 1/2 oz, 1/4 oz, and 1/10 oz coins. 2009 led to a massive halt in the production of Platinum Eagle coins from the US Mint. With demand for platinum down and production capacity shifted to strike more gold and silver, all four platinum bullion coins were halted and the fractional-weights were halted in proof. The Platinum Eagle bullion coins returned in 2014 with just a 1 oz coin and have been issued each year since 2016.

All of these 2020 1 oz Platinum American Eagle Coins are available to you for purchase today in Brilliant Uncirculated condition. These coins come with individual protective plastic flips, mint tubes of 20 coins, or Monster Boxes of 100 coins. The Monster Box contains a total of five individual tubes of 20 coins.

The obverse of 2020 Platinum Eagles includes the face of Liberty from the Statue of Liberty. Designed by John Mercanti and known as “Liberty Looking to the Future.” It captures Liberty’s face with her high-pointed crown on her head. Inscriptions of “Liberty, “2020,” and “In God We Trust” are featured on these coins.

On the reverse of 2020 1 oz Platinum American Eagles is a design known as “Soaring Eagle over America” and it was designed by Thomas D. Rogers. The only design in the series to appear on both the bullion and proof versions of the coin, it captures an eagle as it glides in flight over the continent.