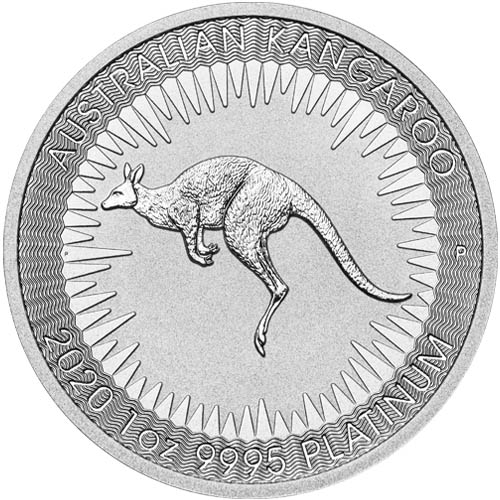 Platinum Australian Kangaroo Coins are the latest addition to the Australian Kangaroo Series. Introduced in 2018, the coins are available only in 1 oz platinum and borrow the popular red kangaroo coin design from Stuart Devlin. The design on these coins first appeared on a copper penny prior to Australian decimalization of its coinage.

The original design from Stuart Devlin captured the red kangaroo in the same design as it appears here. The copper penny, however, did have additional elements not found on these coins. That copper penny featured a flower and the star of the Commonwealth in the design field along with the kangaroo.

On the reverse of the 2020 1 oz Platinum Australian Kangaroo Coin is a depiction of the red kangaroo leaping across the design field from right to left. This iconic design depicts the red kangaroo, one of four subspecies of the marsupial endemic to the continent. The design includes sunburst rays around the outer edge of the design field. This side of the coin includes a new authentication feature from the Perth Mint as well.

Within the phrase “Australian Kangaroo” on the reverse field is a micro-engraved letter only visible under magnification. This feature has been rolled out on numerous 2020 Australian bullion coins.

The obverse of 2020 Platinum Australian Kangaroo Coins features the sixth-generation effigy of Queen Elizabeth II. Her Majesty is featured here in right-profile relief wearing the Royal Diadem crown, earrings, and the Victorian coronation necklace. This image was created by Jody Clark and began to feature on Perth coinage in 2018.

We encourage Silver.com customers to contact us with questions at 888-989-7223. You can also connect to us online through our live chat and email address features.