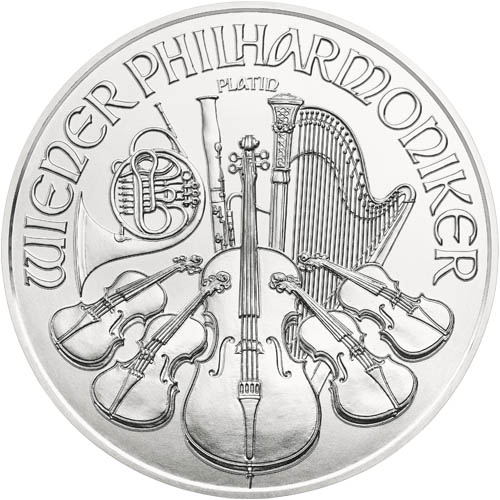 Each of the 2020 1 oz Platinum Austrian Philharmonic Coins in this listing at Silver.com comes with an individual protective plastic flip or a mint tube of 10 coins. Each individual coin is available to purchase in Brilliant Uncirculated condition.

The reverse of 2020 Platinum Austrian Philharmonic Coins bears the design of musical instruments. These instruments are commonly used by the members of the Philharmonic Orchestra and it includes a cello, four violins, a bassoon, a harp, and a French horn. Inscriptions on the obverse and reverse of the coin are in German, the official language of Austria.

All 2020 Platinum Austrian Philharmonic Coins are available from the Austrian Mint. Founded in 1194, the first silver produced from the mint actually came from King Richard I of England. Returning home from the Crusades, he was held captive in Austria by Duke Leopold V and only freed after paying a ransom of 15 tonnes of silver.

If you have any questions about these platinum coins, you can contact Silver.com customer service. Our customer service team is available to you on the phone at 888-989-7223, online using our live chat service, and via our email address.