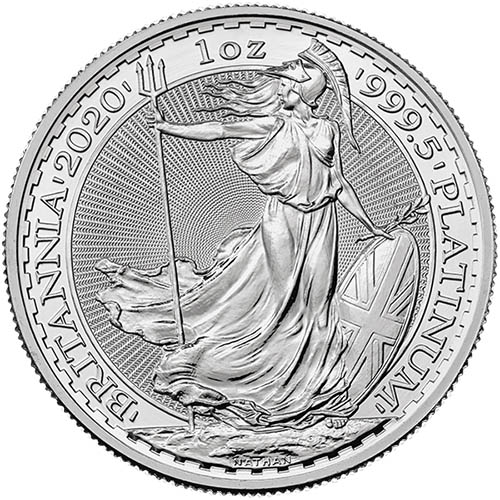 All of the 2020 1 oz Platinum British Britannia Coins in this product listing are available to you in Brilliant Uncirculated condition. The coins are available inside of protective plastic flips, mint tubes of 5 to 10 coins, or boxes of 100 coins.

On the obverse of the 2020 1 oz Platinum British Britannia Coins is the image of Queen Elizabeth II. Her Majesty is depicted in right-profile relief wearing the Royal Diadem crown and is captured at the age of 89 in this design. Jody Clark created this design in July 2015 as the fifth-generation portrait for British coinage.

The reverse side of 2020 Platinum British Britannia Coins includes the depiction of Britannia. This is the modern image of Britannia, a design that has appeared on British coinage at various times dating back to the 17th-century reign of King Charles II. This design from Philip Nathan depicts Britannia wearing a Corinthian helmet, clutching a trident in one hand, and resting the other hand on a shield.

Britannia is the female personification of Britain and the British people. The word is derived from the Greek Pretani and the Latin Pretannia. The former is the Greek word referring to the people the Ancient Greeks believed inhabited the British Isles and the latter is the term used by the Roman Empire to refer to the new province.

Please feel free to reach out to Silver.com with your questions. You can call us at 888-989-7223, chat with us live online, or simply send us an email.