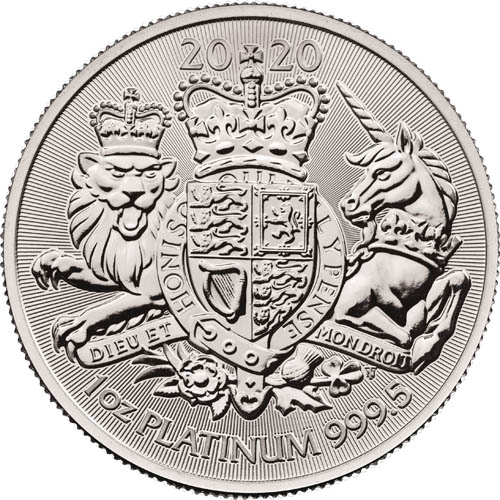 Each 2020 1 oz Platinum British Royal Arms Coin in this product listing is available to purchase individually or in bulk. Individual coins ship with a protective plastic flip, while multiples of up to 10 coins are housed inside of a tube. All coins are in Brilliant Uncirculated condition.

The modern Royal Arms of England as depicted in the design on this face of the coin has been in use since 1837 when Queen Victoria rose to the throne. Each of the quadrants represents one of the three independent nations of Great Britain: England, Scotland, and Northern Ireland. Wales is not represented in the Royal Arms because it was annexed into the Kingdom of England.

The obverse field of 2020 1 oz Platinum British Royal Arms Coins includes the fifth-generation bust of Queen Elizabeth II. This design was created by Jody Clark in 2015 and shows the Queen in right-profile relief wearing the George IV State Diadem Crown commissioned in 1820. In the background field, you will notice the guilloche design element.

On the reverse side of 2020 Platinum British Royal Arms Coins is Timothy Noad’s take on the modern Royal Arms of England. His design prominently displays the heraldic beasts of England and Scotland, the Lion and Unicorn, respectively. The two have been a part of the Royal Arms since King James I unified the crowns in one person in 1603. The shield in the Royal Arms is quartered with the Three Lions of England, Lion of Scotland, and Harp of Ireland all present in the quadrants.

If you have any questions platinum coins, please feel free to reach out to Silver.com. Our customer service team is available on the phone at 888-989-7223, online using our live chat, and via our email address.