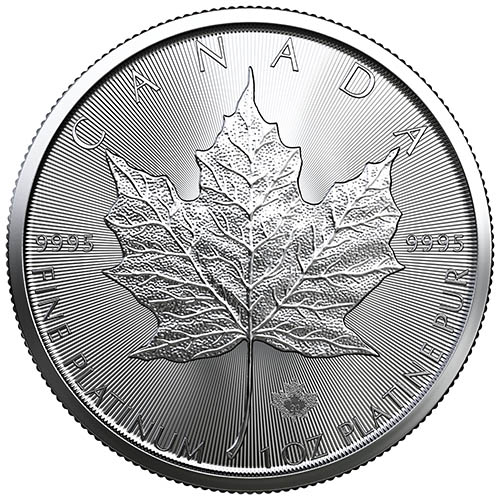 The series continued through 2002 with the five major weights, but was then suspended for years. Like the Platinum American Eagle would later suffer from, demand for platinum bullion dropped steeply and many platinum bullion coin programs were suspended. The Platinum Maple Leaf did not return to production until 2009 and when it did, only the 1 oz coin was available.

On the reverse side of 2020 1 oz Platinum Canadian Maple Leafs is the image of a sugar maple leaf. The official emblem of Canada, this iconic leaf is used on the national flag and has featured on the Canadian Maple Leaf coins since 1979 when the gold bullion version of the coin debuted.

The obverse of 2020 Platinum Canadian Maple Leafs includes the fourth-generation portrait of Queen Elizabeth II. This right-profile bust of Her Majesty was created in 2003 by Susanna Blunt and it features the Queen at the age of 79.

These 2020 1 oz Platinum Canadian Maple Leafs are available to purchase in Brilliant Uncirculated condition. The coins are housed individually inside of protective plastic flips or in mint tubes for multiples of 10. Each coin has radial lines in the background field of obverse and reverse sides, as well as a maple leaf privy mark on the reverse with the date mark of “20” visible only under magnification. Both of these features offer enhanced security for these platinum bullion coins.

We encourage Silver.com customers to call us with any questions at 888-989-7223. We are also available to you online through our live web chat and email address.