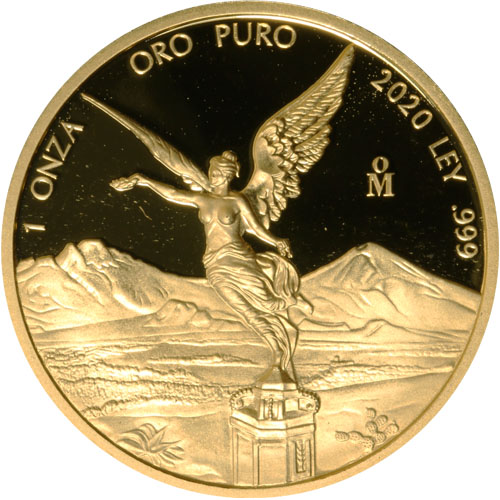 All of these 2020 1 oz Proof Gold Mexican Libertads are available to purchase with protective plastic capsules housing each specimen individually. The coins are proof specimens with frosted designs and mirrored fields. The 2020 release of the Proof Gold Libertad was limited to just 250 units in each of the five weights.

The obverse of 2020 Proof Gold Mexican Libertads features a bust of Winged Victory. Based on the Roman and Greek goddesses of Victory, this image of Winged Victory is based on the statue found at the top of the Mexican Independence Victory Column in Mexico City. Her powerful wings are spread wide out to the sides as her figure leans forward slightly. She holds out her right hand with a wreath crown clutched in her fingers as her left hand clutches a set of broken chains, symbols of Mexico’s hard-won freedom from Spanish tyranny.

On the reverse side of the 2020 1 oz Proof Gold Libertads, you will find the national coat of arms. The Mexican coat of arms features a symbol at its heart that dates back to 1541 and the Codex Mendoza. The image of a golden eagle devouring a snake was provided to the ancient Aztecs as a symbol from their gods marking where to found Tenochtitlan. It was recorded in the Codex Mendoza in 1541, inspired various versions of the modern coat of arms, and even features at the 12-o’clock position on the rim of the reverse along with other historic versions of the seal.

Please contact Silver.com with your questions about these coins. Our team is available on the phone at 888-989-7223, on the web using our live chat, and via our email address.