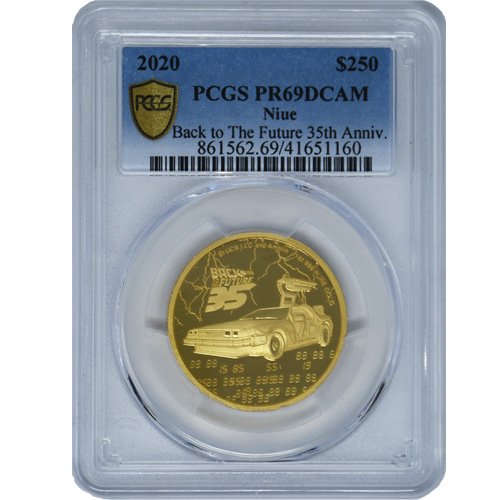 The hottest movie at the box office back in 1985 was Back to the Future. Written and directed by Robert Zemeckis, the film made Michael J. Fox a household name and the entire core cast earned plaudits for its performance in the cult classic time-traveling film. Right now, near-perfect 2020 1 oz Proof Gold Niue Back to the Future 35th Anniversary Coins are available to purchase online from Silver.com.

Each 2020 1 oz Proof Gold Niue Back to the Future 35th Anniversary Coin comes to you in a plastic slab with a near-perfect grade. Coins in PR69 condition exhibit full, original mint luster and have a maximum of two minor detracting flaws. Examples of these flaws are limited to minuscule contact marks or hairlines and must be located outside the primary focal points of the coins. DCAM specimens are those proof coins that have strong, frosted design elements with deeply-mirrored, clear background fields.

The first feature film in the Back to the Future trilogy was released on July 3, 1985. The film followed Doc Brown and Marty McFly as the latter found himself accidentally transported back to 1955. While there, he found a younger Doc Brown who helped him repair the time machine and come up with a plan to generate enough power to fire up the time machine and get Marty back to 1985. While in 1955, Marty came perilously close to altering his own future when it interrupted the first meeting of his parents and nearly changed the course of their lives, and by default, his own.

The obverse of 2020 Proof Gold Back to the Future 35th Anniversary Coins features a portrait of Queen Elizabeth II. This right-profile relief was created in 1998 by Ian Rank-Broadley for use on British coins from the Royal Mint. It depicts the Queen with the Girls of Great Britain and Ireland Tiara.

On the reverse side of the 2020 1 oz Proof Gold Niue Back to the Future 35th Anniversary Coin is a depiction of a DeLorean. This futuristic, real-life car of the 1980s served as the basis for the time machine that Doc Brown developed. Its gull-wing doors and aluminum exterior gave the DeLorean the perfect look for a time-traveling vehicle.

If you have any questions about these gold coins for sale, please feel free to ask. Silver.com customer service is available at 888-989-7223, online using our live chat, and via our email address.