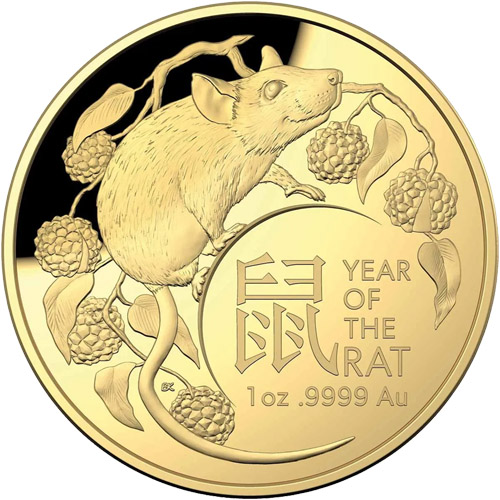 The Chinese zodiac calendar is a very popular theme for coins in silver and gold bullion. Year after year, numerous mints produce lunar coinage with unique designs that honor the animals of the zodiac. In 2020, the Year of the Rat, the Royal Australian Mint released a spectacular domed coin. Right now, you can purchase the 2020 1 oz Proof Gold Royal Australian Mint Year of the Rat Domed Coins from Silver.com.

Each of these coins will ship in a red scalloped display box. In addition to the display box, you will also receive a decorative outer box and a Certificate of Authenticity to legitimize your coin, which is especially important since only 750 of these coins were produced.

The Royal Australian Mint created these coins with a unique domed appearance. This shape makes one face of the coin convex and the other concave.

Queen Elizabeth II is proudly featured on the obverse face of each of these coins. Around the image of Her Majesty, you will see the lunar calendar wheel. The rat is shown at the top of the wheel, and there are numerous engravings on this face, including “Elizabeth II,” “Australia,” “2020,” and “100 Dollars.”

On the reverse of each coin is a rat surrounded by lychee branches. The image of the smiling rat was created to celebrate the Year of the Rat. The rat marks the start of lunar calendar cycle, as the rat was the winner in the legend that led to the creation of the lunar calendar. You will also find various engravings on this side of the coin, including “Year of the Rat,” 1 oz .9999 AU,” and the Chinese symbol for rat.

According to Chinese folklore, the Jade Emperor asked twelve species of animals to compete in a race across a river. Using wit, the rat was the first of the twelve animals to complete the task, earning him first place in the Chinese lunar calendar. People who are born during the Year of the Rat are said to be clever, witty, smart, persuasive, and talented.

The Royal Australian Mint created these coins. The mint is also the sole creator of all of Australia’s circulating coins. Located in Canberra, Australia, it is the first mint in Australia to not be a branch of the Royal Mint in the United Kingdom.

Silver.com’s customer service team is ready to assist you during your ordering process or answer any questions you may have. You can reach us via live chat, email, or telephone at 888-989-7223.