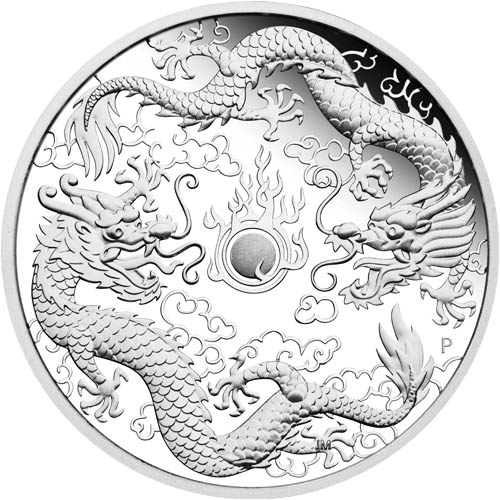 Dragons are the single-most-important creatures in Chinese mythology and culture. The very founding stories of China suggest a heavy role for the dragon in the founding of the first tribes. In fact, dragons are said to have laid down their lives to form the four major rivers of China to sustain the people. Now, 2020 1 oz Proof Silver Australian Double Dragons are available to you for purchase online at Silver.com.

The dragon is revered as a divine mythical being in Chinese culture. The creature is viewed as a symbol of wealth, good fortune, and power. In fact, the earliest Chinese emperors would claim a divine connection to the dragon as a sign of their right to rule. Others would use the dragon on banners and battle standards as a symbol of that divinity and the power of the empire under a particular ruler.

The obverse side of all 2020 1 oz Proof Silver Australian Double Dragons includes a depiction of Queen Elizabeth II in right-profile relief. The Queen’s portrait has featured on all Australian coinage throughout her reign as she is the Queen of England and the Commonwealth, but also holds the title as Queen of Australia. This design debuted on Australian coins starting in 2018 as the sixth-generation portrait of her figure. She wears the George IV State Diadem Crown that was commissioned in 1820 and features 1,333 diamonds in its design.

On the reverse face of 2020 Proof Silver Australian Double Dragons is a depiction of dueling dragons seeking out the same thing: the flaming pearl. The two slithering dragons move about the outer edges of the coin’s design field looking in toward one another and toward the flaming pearl in the center of the design. In the background, you will notice stylized clouds blowing through the design element.

These 2020 1 oz Proof Silver Australian Double Dragons are housed inside of protective clamshell displays from the Perth Mint and come with a Certificate of Authenticity from the mint.

Located in Western Australia, the Perth Mint is owned by the state government and was built in 1899. Originally intended to serve as the third Royal Mint facility on the continent, the Perth Mint never fulfilled that precise role. It did provide currency coining for the nation as it moved toward independence and now operates independently of the Royal Australian Mint.

Silver.com customer service is available to answer your questions about buying silver at 888-989-7223. You can also reach out to us online through our live chat and email address.