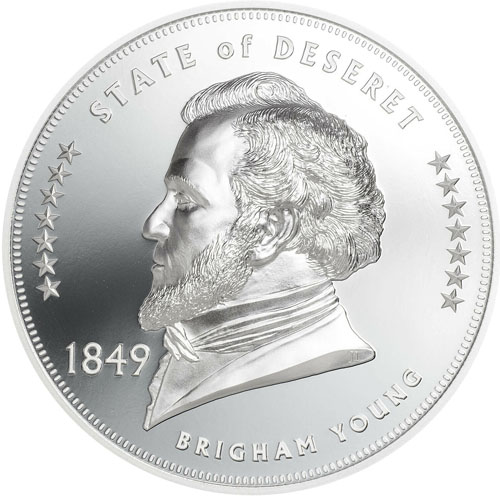 The Lost States of America coin series lets you bring some little-known history to your coin collection. These coins, which were designed by Joel Iskowitz, also provide unique visual elements for your display case. The 2020 1 oz Proof Silver Cook Islands Lost States of America Deseret Coin is the second in this series, which is expected to reach 20 total designs.

Your coin ships in a protective plastic capsule to reduce the risks of damage during transport. The transparent coin capsule also provides a great option for keeping your coin safe while you own it.

Every bit of this coin is covered in symbols of history and unique elements that could fuel long conversations among numismatists. It starts on the obverse, where a portrait of Brigham Young is centered among inscriptions that include the name of the lost state of Deseret and the year 1849. The year is important because that’s the first year the provisional state of Deseret existed. This lost state only made it to 1850 before its existence was replaced by the actual state of Utah. Young petitioned for both territory status and statehood for Deseret, but a compromise was struck in 1850 to form Utah, which covered a smaller part of the American West than Deseret did. There was some concern that the large state of Deseret could create a Mormon theocracy.

On the reverse of this 2020 Proof Silver Cook Islands Lost States of America Deseret Coin the history continues. The main image is a detailed depiction of bees in a hive. The life-like rendering is made possible by the high-relief structure and the Smartminting technology used to produce these coins. The bees elude to the fact that Deseret is believed to be a word for honeybees. The Book of Mormon tells the story of an ancient people exiled to what is now the American West after the Tower of Babel was built and God scattered the peoples. Below this image is an image of the heads side of a standard Cook Islands silver dollar. That includes the Ian Rank-Broadley image of Elizabeth II and all the standard inscriptions.

Order your 2020 Proof Silver Cook Islands Lost States of America Deseret Coin from Silver.com. If you have any questions about your order or silver for sale, reach out via chat or email or call us at 1-888-989-7223.