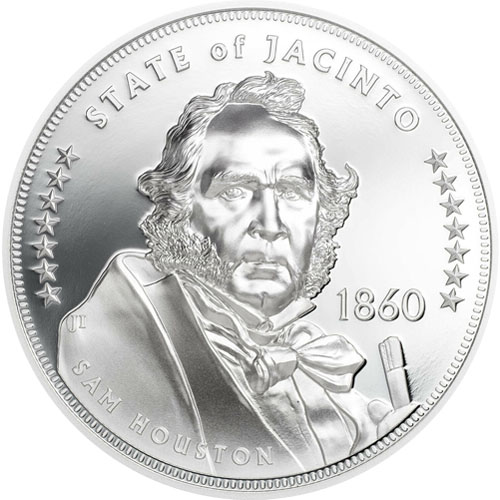 There have been various moments in American history during which the fabric of the nation and the shape of the American map could have drastically changed. The successful Texan independence movement in 1836 almost resulted in the eventual formation of two different states. Today, 2020 1 oz Proof Cook Islands Silver Lost States of America Jacinto Coins are available to you online at Silver.com.

The Battle of San Jacinto was the deciding moment in the Texas independence movement. General Sam Houston led 800 Texans against the Mexican Army under General Antonio Lopez de Santa Anna and his 1,500 troops. Lasting just 18 minutes, the Texans managed to kill 650 Mexican soldiers, wound 208 more, and capture 300. Among those captured was General Santa Anna himself, who was held captive for three weeks before signing a peace treaty that stipulated the Mexican Army leave the region.

All of these 2020 1 oz Proof Silver Cook Islands Lost States of America Jacinto Coins are available with a plastic capsule. These silver coins for sale are struck in high-relief, with proof visuals that include frosted designs and mirrored fields. The high-relief strike delivers depth for the background field and greater relief for the 3D design elements.

On the obverse side of 2020 Proof Silver Cook Islands Lost States of America Jacinto Coins is a portrait of Queen Elizabeth II in the lower field, with a depiction of the Texans and Mexican Army facing off at the Battle of San Jacinto in the background field.

The reverse field of 2020 1 oz Proof Silver Lost States of America Jacinto Coins comes with a portrait of Sam Houston. The commanding general of Texan forces at the Battle of San Jacinto, Houston would go on to serve as the 1st and 3rd President of Texas during the Republic era, serve as a US Senator from Texas for more than a decade, and then serve as the 7th Governor of Texas as a US state.

Houston’s vision for the newly independent Texas could have altered the American map forever. He and others envisioned a State of Jacinto within modern-day Texas that would have stretched from the Brazos River to southeastern Texas.