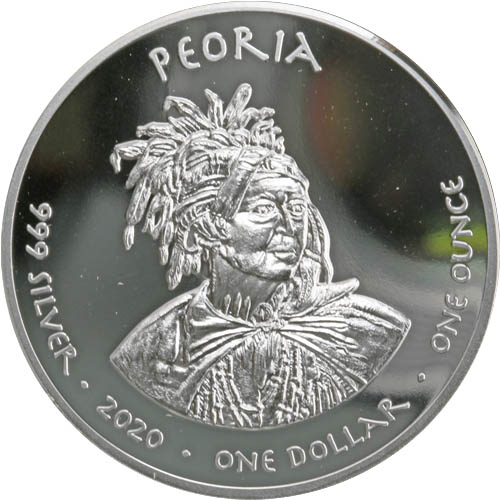 The Native American Mint’s Proof Silver Dollar Series of silver bullion coins are unique. These are the only American coins you will find that have a face value in dollars not supported or recognized by the federal government. However, as sovereign nations, federally recognized indigenous tribes can issue bullion coins. The 2020 1 oz Proof Silver Illinois Peoria Tiger Salamander Coin is now available to you for purchase online at Silver.com.

The Peoria people historically inhabited lands in what are now the US states of Illinois, Missouri, Michigan, and Ohio. Although there are no remaining survivors that speak the original Peoria language, there are those who still speak the Miami-Illinois tongue. Peoria people are also considered to have come from Algonquian-speaking lineage associated with indigenous tribes along the eastern Great Lakes and the northeastern US.

Most Peoria people are identified as having been a part of the Illinois Confederation. This group of 12 to 13 separate tribes was collectively referred to by outsiders as the Illini and most spoke the Miami-Illinois dialect.

On the obverse side of 2020 1 oz Proof Silver Illinois Peoria Tiger Salamander Coins is the depiction of a member of the Peoria people. Over the course of several decades in the 19th century, the Peoria people were relocated to Indian Territory in Oklahoma. The Peoria were originally removed from lands in Illinois following an 1818 treaty, with an 1832 treaty ceding their lands in Missouri to the federal government. By the end of the Civil War, almost all Peoria had been relocated to Oklahoma.

The reverse of 2020 Proof Silver Illinois Peoria Tiger Salamander Coins features a member of the mole salamander species. Common throughout certain regions of North America and popular today as a pet, the tiger salamander is so-named for its blotchy skin that reflects the patches of different fur colors common on a tiger.

These 2020 1 oz Proof Silver Illinois Peoria Tiger Salamander Coins are available as proof specimens with frosted designs and mirrored backgrounds. The coins are packaged individually inside of protective capsules.

We encourage Silver.com customers to call us at 888-989-7223 with questions. You can also chat with us live online or email us directly.