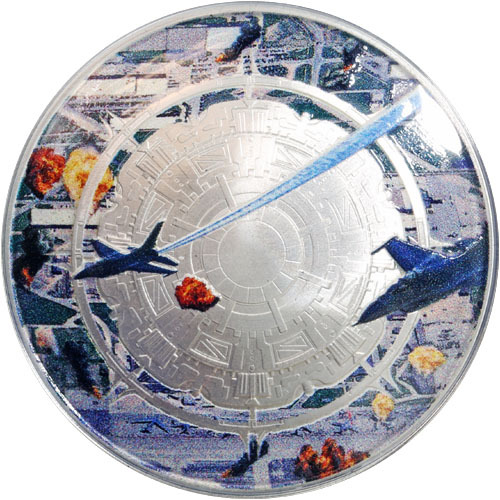 The Native American Mint is operated in California by the Jamul Sovereign Nation. It is well-known for its Proof Native American Dollar Coin Series, but it also strikes a number of separate collectible coins with low mintages and beautiful designs. All of its coins come with the backing of various different indigenous nations, such as the federally recognized Mesa Grande Sovereign Nation. Now, 2020 1 oz Proof Silver Mesa Grande UFO Domed Coins are available to you for purchase online at Silver.com.

This silver coin release features images on both sides of UFOs, or unidentified flying objects. This term is used to broadly characterize flying objects for which the human mind simply has no identity. These items don’t look like commercial or military jets, helicopters, or any other known form of aircraft developed by human hands. Moreover, the craft don’t operate like any known aircraft.

The obverse side of the 2020 Proof Silver Mesa Grande UFO Domed Coins includes a depiction of an alien craft as seen from above. The only other elements on this side include markings of the weight, purity, metal content, value, and date mark of the coins. It is worth noting these coins do have a One Dollar value, but are not legal tender in the United States.

On the reverse face of 2020 1 oz Proof Silver Mesa Grande UFO Domed Coins is the image of a similar spacecraft launching an attack on a military installation. The colorized field reveals explosions rocking the base and the alien craft. US fighter jets are responding to the aggression with attacks of their own.

These 2020 1 oz Proof Silver Mesa Grande UFO Domed Coins have a concave, sunken obverse field and a convex, domed reverse field. The coins are housed inside of capsules and presented in black display boxes. Each coin comes with a Certificate of Authenticity.

Silver.com customer service is available to answer questions about silver for sale at 888-989-7223. We are also available online through our live chat and email address features.