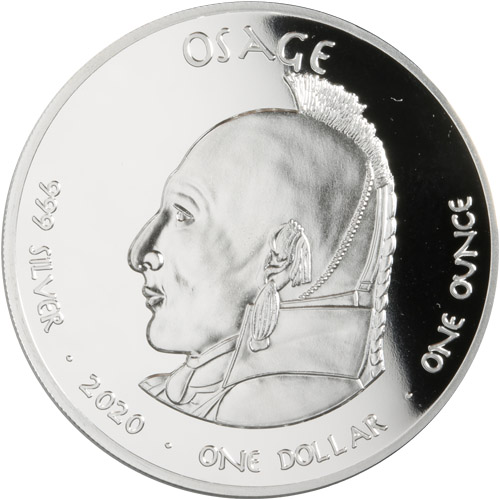 The Proof Native American Dollar Series is as robust as any other collectible series of silver you can buy. Those buying silver in this series have had new options available each year dating back to 2015 when the collection debuted. Five designs are released for each date mark representing different states, indigenous nations, and native species to a given region. Now, 2020 1 oz Proof Silver Missouri Osage Mule Coins are available to you for purchase online at Silver.com.

The Proof Native American Dollar Series is a diverse collection that numbers 32 different designs with the release of this 2020 Missouri Osage Mule. Five coins are issued with each date mark, with each one representing a different indigenous nation and current US state. The reverse of each represents the design of an animal that was crucial to the life of the represented indigenous tribe and/or is native to the region.

For this release, the Osage Nation is represented. With a modern-day population of 20,000, the Osage people are one of the more popular indigenous tribes still in the United States. The Osage Nation historically occupied lands in Missouri, Oklahoma, Arkansas, and Kansas in the near-four-corners region that included central and southwestern Missouri, southeastern Kansas, central and northwestern Arkansas, and most of eastern Oklahoma.

The obverse side of the 2020 Proof Silver Missouri Osage Mule includes a portrait of a native Osage figure. The Osage people, prior to the 17th century, lived further east in the Ohio Valley. After several wars with the Iroquois, the Osage are believed to have moved west in search of greater hunting grounds and distance from the Iroquois who were moving west from New York and Pennsylvania.

These 2020 1 oz Proof Silver Missouri Osage Mules are available to you in brand-new condition with proof visuals. The coins are housed individually inside of protective plastic capsules. Though each one has a face value issued by the Native American Mint and Jamul Sovereign Nation, the coins are not legal tender in the US.

Silver.com customer service is available at 888-989-7223. You can also chat with us live online or email us.